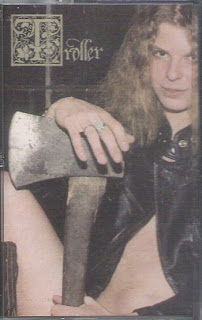 This is one bad ass little tape right here, one that's been hogging a lot of decktime since I first received it. Looking at the cover of this cassette, I don't blame you for thinking that this sounds like some weirdo Finnish metal band. That's what I would have thought if I hadn't read the press release. However, Troller is a trio from Austin, TX and the sound of the album is somewhere between mainstream synth-scores of the 70s and 80s from the likes of Pino Donaggio, Giorgio Moroder, Jack Nitzche etc. and the recent wave of icy disco acts like Chromatics or Glass Candy and that sort of ilk. Though Troller has just a slightly darker viewpoint.
Just about every sound on this tape sounds like it could be (should be? will be? is?) in a movie. I don't just mean the instrumental or ambient passages; the songs themselves sound like they should be soundtracking montages of important shit unfolding. As a huge cinema fan, I mean this as a great compliment.
One wise choice that achieves this result is that the vocals are directed to become part of the ether. They stake out their territory and certainly have their impact but they aren't necessarily the focal point as is usually the case in song-based material. This makes for a hellishly heady listening experience.
The opener "Milk" isn't the strongest composition on the tape, but it's the right choice to start things off. It establishes the mood of the tape instantly. That mood is seductive dread; this is some enticing black widow shit that can be none too good for your soul. A sinister synth bass line anchors the track which somehow manages to be slinky and looming. They unleash synthetic ghouls and ghosts in a disconcerting cacophony and sprinkle in a little trip hop seasoning for flavor.
Talk about attention grabbers, when "Tiger" entranced my speakers for the first time, I dropped everything--I was literally spellbound. Blogging is a quite egotistical endeavor, there's no discussion, no average user rating, no academic distance, not even a arbitrary grading scale to share with and compare to other writers. I think something's great simply because I think something's great. And I think this song is great. The song does everything I want it to do and goes everywhere I want it to go. From the nostalgic and chilling introductory synth line to the propulsive drum programming at the chorus to the extended bridge/synth solo near the end; every move "Tiger" makes satisfies my needs and desires to the tee. It's impeccably composed with an incredibly evocative emotional heft; the portal into a transcendent new world. Utterly perfect. I can't get enough. (Feel free to disagree with me, the song is embedded below, but I dare you to not be captivated. Good luck with your new addiction.)
Troller generates ambient interludes between the six songs on the tape and the interlude after "Tiger" is surprisingly friendly, foggy electronic burble. The interludes were a great choice because you are never permitted to exit the world of the cassette. Each song is only a movement in a grander piece.
"Best" is another great one. The track sort of twists and winds, writhing with tendrils tensed. It's structure and melodies are hard to put your thumb on it, it seems to continually worm its way just out of your grasp but you continue to follow anyway. It's a strange but potent composition. And oh man, "Thirst" is so bad ass. Deep fuzzy bass, eerily woozy synthetic chimes/voices and the relentless ratatat of a programmed hi-hat. It's reminiscent of earlier John Carpenter scores but significantly more lush. So great yet so unsettling. You can't take your ears off it.
On "Winter," Troller edges just slightly more into pop territory, mainly because they lift the fog a bit and create a less foreboding environment. More notably, the vocalist unleashes her pipes, making for a few moments of lovely catharsis that arrive at the precise point the album calls for it. It's a glorious and beautiful track. The following interlude takes you back down into the dank, swampy depths prepping you for the closer "Peace Dream." Coming full circle, the finale features a similar vibe to the opener "Milk," this track is more propulsive though. An uneasy bass-synth riff churns and churns until a beautiful bridge floods the track with a little light. Man, the vocalist really earns her keep on this one as well, she nails a series of perfect melodic counterpoints, playing off her heavily synthetic surroundings and imbuing the track with so many emotions. It's a great note to go out on.
This record is phenomenal; as far as I can tell this is their first/only release which is ridiculous because everything is so well-executed from the production to the performance to the composition of the material. There are very few flaws which is staggering. It's mind-boggling to think how good their next record could be. This is simply one of the best tapes I've heard this year and I think "Tiger" has to be my favorite song so far, I can't think of something that surpasses it right now.
Holodeck has also slated Troller to drop on vinyl sometime in the future, which is a good thing as there's no way a hundred copies will satiate everyone's appetite. For the time being though, the cassettes are available now and I see no reason why anyone should sleep on this.
Posted by Auxiliary Out at 1:58 PM