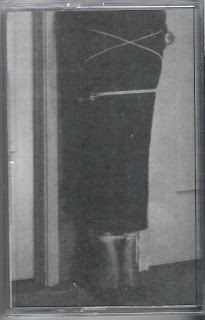 Feeling low? But not quite low enough? Do you want to be splattered on the pavement? You're not alone. Black Leather Jesus can help. With their support you can sink even deeper.
Pretty spiffy pitch, right? Well that's my hard sell on this steamroller of a c20 by Richard Ramirez's Black Leather Jesus project. BLJ is described as Ramirez's "band," with a revolving door of collaborators over the past 20+ years. However, there's no line-up listed and this is a far cry from that newfangled "rock & roll" the kids are listening to nowadays.
This thing is pure roughhousing. Thickass, relentless bass rumble, there's plenty of feedback, oscillations, maybe a little tape manipulation trying to battle (unsuccessfully) to the surface against the bass crushers. The recording is actually pretty layered like there are multiple people doing multiple things (maybe they weren't blowing smoke with this "harsh noise band" idea) but loud volume is necessary to grasp all the elements that are going on (headphones help as well)
The first side is called "I Like Him to Worry and Still Have to Do it" and it blasts you in the face right out the gate. Hefty slabs of feedback-loop generated rumble pound each other like linemen and plenty of hi-pitched feedback manipulation helsp to propagate the all-out cacophony. Multiple listens reveal a steady percussive thump through certain sections, which must be why I always end up nodding my head so forcefully during such esoteric sonic mayhem.
The next side is similar but I like it better. Things come at you from multiple directions on "Damaged by the Act." The track's in the red from the get-go but the LED on the meter had to have burst no later than a couple minutes in. This is sort of like the climactic car pile-up at the end of The Blues Brothers where there's simply no end to the destruction; whenever you think it's reached its limit someone new crashes in. If you're listening closely there's even a sub-bass groove underneath the forty fucking tons of distortion. Black Leather Jesus traffics in static but none of it is particularly static if you catch my drift. Part of me is even wondering if someone's actually playing drums through a hundred DOD Death Metal pedals or something. There's a heavy, though buried, percussive feel--a relentlessly breakneck, skull crushing throb. Trekking in uncharted havoc, shit's off the fuckin' grid.
My ears are literally ringing. These guys would probably be fun to see play live.
The perfect soundtrack for burning your house down has finally arrived, check it out.
Posted by Auxiliary Out at 9:54 PM