“To Hide Her Blinding Brightness” The Mighty Acts of God We Could Fail Under Stars (CD-r) [MusicYourMindWillLoveYou, 2007] 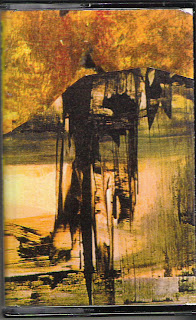 Alright so it’s been forever, and I’m sorry. I had to focus on some other things for awhile but people still kept sending me really rad sounds and I can’t leave them hanging any longer. My life is still kinda crammed but I'm gonna try and get reviews posted has regularly as possible. So wish me luck. Anyway that is plenty enough of that, lets get to the review.
Tonight we have a sold out Robedoor release (is there any other kind?). It’s a cassette (w00t y3@h!) on the pretty much just born Northeastern label Goaty Tapes. Hopeless Transformation is the first release on Goaty Tapes (the name always makes me think of that lame Christian rock label Gotee records, maybe it’s a play on that?) and also challenges Hidden Ascension for the title of best Robedoor release in existence.
The piece on Side A is called “Scaled Apparition” and its pretty killer from the get go. There is a looped keyboard, bass and some distant vocals and the whole thing just sounds so smoky and awesome. The piece just lilts and drifts along interrupted somewhat by rough bass abuse, at least I think it is bass but it would make sense if it was distorted drums cause the thing really rumbles. The track is really led by the vocals despite them feeling so far away which is kinda cool. Things stay pretty sedate throughout until the vocals get louder and more anguished. There are lots of sounds going, like I’m pretty sure there’s drums in there somewhere, but it’s hard to discern where everything is coming from. It’s a big looming mass. As rad as the first side is, Robedoor totally one-up themselves on the B-side.
“Violent Memory” is among the best single pieces Robedoor has put together. The track is simple but entirely engrossing and even occasionally addicting. It’s based on a long loop of bass/guitar and a church organ type thing creeps in along with other drones. It is a somber but melodic trudge through space and mud, and sounds wonderfully murky on tape. Around halfway through voices and cymbals somehow both augment and transcend the dirty gloom. The arrangement slyly thickens up on you too, what started as a lone looped instrument is now gently rolling hills of fuzz. Listening to this track, I’m finding myself in one of those binds where a track’s beauty/greatness/whatever is beyond my ability to express it in words. I can’t properly illustrate the cycling hypnotic melody for you or even really do that great of job of describing the arrangement itself. It’s just Robedoor at the top of their game, on the best medium to transmit their sounds, and I sincerely hope there is a reissue on the way (it'd be a hell of an LP too) or you stumble across it at some point in your life if you haven’t already. One the most effective uses of fuzz and drones I’ve heard.
Also I have to mention how killer Goaty Tapes has made this release too, especially for a first timer. There’s a professional quality j-card with artwork reminiscent of New Age Cassettes but in color and on cardstock. What I found to be the coolest was the labels on the black tapes, which are fittingly cut and printed to look like dark, mysterious mountains. It comes with a handnumbered insert of someone praying as well. Goaty, job well done, I hope to see more of you and your tapes.
As I mentioned earlier, sold out at source :( but maybe a distro somewhere is still holding onto a copy?
Posted by Auxiliary Out at 7:26 PM 2 comments: