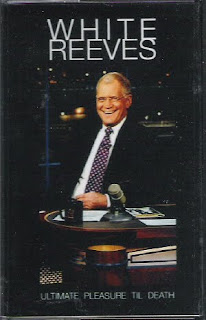 So, I don't watch David Letterman so I can't tell if there's a specific reason why his face is plastered all over this tape. Is "White Reeves" a gag he does, or is "ultimate pleasure til death" a catchphrase of his? Is his goofy face just scratching that ironic-pop-culture-icon-on-a-tape itch we all have? Ah, just a few of the so many pressing questions we ask in this cockeyed caravan we call life. Boy...
I'm late to the game on getting this review done, as usual, but the only review I've seen on this tape didn't really "get it" so I am here to set the record straight. Getting down to brass tacks, White Jeeves is a duo of Ryan Emmett (Hunted Creatures, head of the Dynamo! Sound Collective) and Micah Pacileo, also of Hunted Creatures, and their sounds here are deliciously weird. The tape features a bunch of miniatures grouped into two 10-minute sidelong pieces making for an enjoyable 20 minutes of loop-junk. Everything is heavily processed but at least some of the sounds seem to have been acoustically produced in their initial iteration. There's a good dose of chirpy and sputtering synth than manages a groovy, almost record-scratch-esque quality. Behind every great chirpy synth there's great lo-mid textures and the ones here are so good you don't necessarily pick up on them; they have just enough going on to fight off any stagnation but enough modesty to be felt and not noticed. White Reeves views each miniature on simple terms and is really successful along the lines they've laid out. The thirdish piece slowly morphs into a lurching, hypnotic opiate-addled whirlpool and is awesome. Things take a seriously weird turn when the side ends on a muffled recording of a motivational(?) speaker.
The piece that kicks off the second side is pretty sick. Lots of pitch manipulation, lots of percussive loops and lots of SPACE. Even a little cosmic keyboard riffage. None of the elements should work but they definitely flip me the bird and just go ahead and gel. Love the ragged vibe and the track is practically an epic in comparison to the miniatures it's in bed with. The final piece whips out some plucked piano strings, 20 100ms delay pedals and mild-mannered oscillator hum. It's a real smooth way to go out.
Man, I just love the vibe of this band and even though this tape is a collection of sketches more or less, it's still pretty goddam cool. There's a no-nonsense vibe to their nonsense; they aren't gonna waste your time by releasing c60 after c60 of them dicking around--only the golden hits will reach your ears my friends. I'm hoping to the heavens this isn't some one-off thing cause I can totally imagine these guys expanding on their work here and dropping a pretty stellar 33 minute record. There it is; there's my challenge: go make a stellar 33 minute record, you boys got it in ya. And don't forget to thank me in the liner notes when you do.
Posted by Auxiliary Out at 8:14 PM No comments: