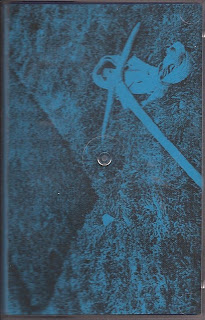 I've received a few tapes recently that all rock out in various fashions so I'm lumping them all together here. After all they are all united under the umbrella of ROCK. Plus, their all self-released tapes, what's more rock & roll than that?

Railings - Railings [No Label]
I've been listening to this tape by Railings a lot. It's the enigmatic project of an A. Ian Smith. It's far from perfect and is uneven in many ways, but it has something. I don't know what that something is exactly but there's just this certain magic to it. While it's quite rough-hewn in particular areas, at various points Railings transcends its modest bedroom origins
After the mellow sample-fueled intro "The Carter," Smith launches into a strong 80s pop-rock vibe that is morphed into a magic wand and waved at will. In a weird way, this thing sort of sounds like Prince and Bono fronting a post-punk band filtered through the lens of occasionally sampledelic bedroom production value. As someone who pretty much hates Bono, that may sound offputting but it's actually awesome.
Frenetic drum machine is pushed loudly to the forefront while being caressed by soft synths and reverb-laden guitar. Most striking are Smith's vocals, which seem to stretch from the far corner of the room. He really goes for it vocally and manages to pull it off, making it one the tape's most appealing traits. "W.O.R.L.D. (Harry Chapin)" and "Guidonian Hand" illustrate this aesthetic well but the cassette's absolute pinnacle and the track that continues to captivate me without fail is "Plastic Veins-Irrigation Channels." It's a mesmerizing work pop song artistry. With a decidedly limited palette Smith conjures up an alluring work brimming with charismatic hooks. Every time I listen, it's never long enough.
Whether Smith is getting a little jazzy on "Ern'" or downshifting into full-blown power-ballad mode on "Gear Mountain" whilst interspersing instrumental vignettes along the way, it's all a refreshing take on home-recorded cassette culture. I can't say whether you'll like it or not but you're doing yourself a disservice if you don't check it and find out. It seems to me like only a matter of time before people catch on to this guy.
Buy/Check out here 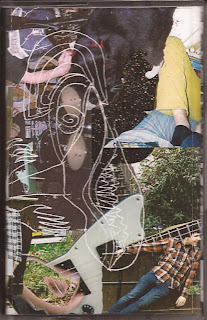 Psychic Blood - Autumn Curses [No Label]
Psychic Blood is a Massachusetts power trio that channel 1980s Sonic Youth with no remorse. Seriously, I'm pretty sure this could be some sort of meta-music art thing. They drop riffs from "Catholic Block" out of nowhere, on a song called "Tuff Love"--I mean there's just no way they aren't trying really hard to sound like 80s SY. They named a song "Daydream." I love Sister, it's a great album so, hey, why not try to sound as awesome as it does, right?
The trio eschews all the hi-falutin' avant-garde moves for the most part and just rock out, retaining the snark, the slashing strings over propulsive drums and dynamic song structures. "Annihilator" knocks out some catchy chord progressions en route to combative noise mongering and slips into the feedback glisten of "Roving Mind." "Here is No Truth" has a "Beauty Lies in the Eye" feel but gets considerably more aggro. And oh yeah, did I mention that they named a fucking song "Daydream." It's actually one of the best ones as it uses Sonic Youth a little more as a jumping off point rather than an end-goal. It develops into a sweet little song with a wordless, cooing refrain. If they fill their tapes with pop hooks like that they really might be getting somewhere.
Basically this isn't original in the least but it doesn't claim to be (and I'd argue it acknowledges it with a wink.) I also can't say I didn't enjoy it. I'd take a good, unabashed Sonic Youth worship/ripoff band over a lot of others. Plus, the band sounds like they really enjoy playing together (and listening to Sonic Youth) and sometimes that's all that really matters in life.
You can buy or download here and make your own judgment. 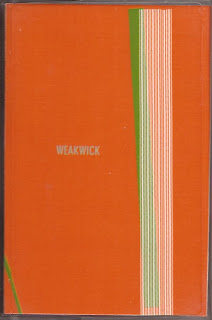 Weakwick - Weakwick [No Label]
Weakwick is an odd little duo. At first glance, their jams sound like an amalgam of Gay Beast and Lightning Bolt (after multiple glances this still holds fairly true actually.) After all, those are some pretty damn good bands to sound like. However, where Weakwick really hit their stride are tracks such as "Weisenwytch" and "Heiress Error" which use repetition in a weirdly hypnotic fashion. Sometimes it's live, sometimes it sounds electronically aided, but the duo locks into these strange little zones among the treble-laden spikiness. It has shades of latter-day Royal Trux to me. There are a few post-hardcore-esque vocals moves in there once in a while to make sure the listener doesn't get too comfortable. There's a sort of obnoxiousness to the hypnosis that really works. It's intriguing and surprisingly captivating.
On "Minglers," they only push it halfway to song status, deeming the repetitive creaks, buzzes and garbled vocals to be sufficient mood setters. They can flip the switch back and forth going from "Minglers" to the straight-up punk rock of "Fashion Fingers" back to the guitar skronk of ">" They can even pull off melodically driven tracks like "Fluid Alone" or the bleached blues of "The Hits." These aren't ballads mind you, but they are structured with weird spindly riffs.
Another band that comes to mind is Sightings, though Weakwick is far less fierce and intimidating  Each band explores amplified minimalism, breaking rock & roll into a million pieces and duct taping the shards back together. I think this is Weakwick's first tape so I'm definitely intrigued to see what the future holds and how they go on to develop their sound. One of the more interesting "new" noise rock bands I've heard in a while.
I actually have no idea how one would go about procuring a copy of this tape but you can check out their Soundcloud page here
Posted by Auxiliary Out at 7:25 PM 1 comment: