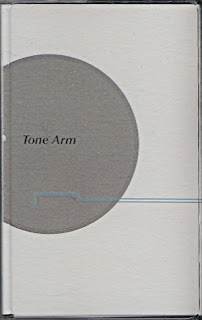 Here's the deal, Cory Card known for his Foxy Digitalis scribin' and his Stone Baby vibin' launched a cassette label earlier in the year christened Cae-sur-a. They've been rollin' right along droppin' a bunch of cool tapes all over the sonic map. Some killer noise from York Factory Complaint, perhaps even more killer drones from Hering und Siene Sieben and Pine Smoke Lodge and even some rock bands are in there. However, the crown jewel in my estimation fits firmly in the "other" category.
The inside flap describes Tone Arm as "a solo improvisation for turntables, prepared records, tone arm, bells, implements, flutes, vibratube, baritone sax ..." Wow, I shudder to think what that ellipsis implies. In case you didn't glean it from the tape's own description, Tone Arm is bonkers! I'd never heard any of Steve Baczkowski's work before this. I know he did a record on baritone sax with Bill Nace that I should track down but otherwise, the guy's a mystery to me. How representative is Tone Arm of his repertoire? No idea. Does this guy crank out madness such as Tone Arm with the ease in which others eat breakfast? That's a scary thought indeed.
I give up, this is too difficult to pin down; I'm sitting here at my keyboard trying to catch as catch can with little success. Um, where can I start? Where's a foothold? I think there might be some bird calls in here. Maybe? But then again they could be sounds that only sound like bird calls. After an initial trial by fire--wild speed manipulation scree--at the outset, the first side settles into a nice little abstract riverboat trip. The aforementioned birds are chirping, a slo-mo record creates the ebb and flow of the swampy current; it makes for some pleasant traveling, observing the exotic locale. That is until Baczkowski pops his lid. There's an explosion of sound, among it violently clattered bells and a severely trash'd and slash'd old timey song--could be a TV show theme for all I know. All the fragmented non-music cues are subsidized by flute pieces and other more "recognizably" musical elements, perhaps wisely. No one without a taste for the bizarre will probably dig this but to Baczkowski's credit, this is pretty accessible for being so far off the deep end. Tone Arm sounds like it was recorded/created in real time, and considering how well paced and composed it sounds this Baczkowski seems like a real proficient mind warper.
There's a pause as the tape reverses course but the second side brings back the energy instantly. A series of percussive loops lope along in hypnotized cave man bliss while Bacz regurgitates all sorts of movie monster moans and twisted whistle sound mess. The side gets more and more discombobulated as it moves forward, concussing itself, slipping itself into its own coma. Oddly enough, out of this fog of uncertainty Baczkowski winds up these strange, dare I say, catchy loops and lets 'em fly. He's obviously digging it; he grabs his baritone and wails away over his makeshift backing band until pressing stop.
This cassette is really wild and I'm not at all sure how to succinctly describe it. It's plunderphonic, sure, but that's far from its defining trait. It has some of the left-field, psychedelic sample-clutter feel that Tomutonttu has pioneered, and then there's guitar "players" like Nace and Brian Ruryk that share the penchant for dynamic use of noise. Of course I can't leave out West Mass weird fucks like Chris Cooper and ID M Theft Able in my spaghetti-throw. Are any of these sticking? Well, regardless, this tape is sticking in my deck because for a mere 20 minutes Baczkowski covers miles of too-little-if-ever-seen territory.
As these things go, the good ones are always gone, so hit the distros to track down a copy of this son of a bitch. Cae-sur-a is still stocked with a bunch of other good tapes of all stripes, so I recommend giving the site a peep.
Posted by Auxiliary Out at 6:46 PM 2 comments: