TV dinner Education - Nya Perspektiv [Cudighi]
I'd never heard of TV dinner Education before and the little bit I saw about them described the duo as a psychedelic band. I dig psychedelia but I was thrilled when I listened and realized this band is so much more. TV dinner Education is a duo of Loti Solovitsky contributing voice, drums, FX and tapes and Julesy Bejbi presiding over prepared toy guitar and tapes. Though it might not be readily apparent by that list of instruments, there are some strong strains of mutant disco and the more affable (yet avant-garde) areas of no wave and its latter day acolytes.

There's also a hearty dose of bizarre sonic emulsification, which they stick right up front ("Dyslectic Clam: A"). I love hearing a band kick off a record with their weirdest track; it's a heavy duty power move that gets you excited for what's to come. "Clam" is a five minute clatter and scrape fest that falls somewhere between sloooooooow-motion Brian Ruryk and the weirder parts of the Sightings discography. What a way to start! TV dinner Education then immediately juxtapose the power trip with the contagious simplicity of "Easy Busy". There's certainly a dub vibe to it, and an adventurous hip hop producer could sample the shit out of it and make a really hot beat.

"Easy Busy" conjures visions of a pared down Gang Gang Dance, stripping away the polyrhythmia down to the heart of the groove. This continues on "Excellent Choice" which immediately leaps out as a favorite (excellent choice!) after a tumultuous middle section freakout the duo lock into a strangely captivating guitar/drum pattern. Elsewhere on the tape, you hear the voice of an evil spirit luring you into a deep dark forest ("Little Birds") as well as a throwback bassline ("External Borders") that recalls the brief era in the 90s where you could find success being in a funk-metal band. What a time...

Nya Perspektiv is chock full of invigorating sounds and TV dinner Education achieve the rare feat of pumping out grooves without sacrificing a lick of their abrasive aberrance. Check this crew out! 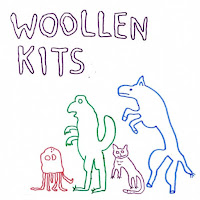 Woollen Kits - Maths [R.I.P. Society]
I have a Kits LP which is solid, heavily channeling Beat Happening replete with the Australian version of Calvin Johnson on the mic. I liked it enough to grab this 7" platter at the local shop and I'm so glad I did.

Roaring like an amped up, totally punk Beat Happening, "Maths" is a straight up banger with the kind of ascending/descending riff you'll be replaying endlessly in your nog while you fall asleep and it will still be there when you wake up. A tad surf-y, with plenty of fuzz, it's rock & roll bliss plain and simple. The singer's voice is so deep it gets a little lost in the lo-fi slop and it would have been nice to have a voice that could cut through a bit but that's a minor gripe for a tune this bulletproof.

"Out of Town" is a better fit for his voice. It's a bit burlier and the playful, sing-songy quality of the melody of "Maths" is absent here. The monotone voice is met with a chunky two-chord riff and the perfect couple is all each other ever wanted in a mate. Now who can explain this extra "L" in Woollen? An Aussie thing or are they just trying to add some edge like Jaill? 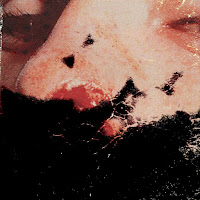 Saint Black - Saint Black [Semi-Permanent]
This self-titled full-length from New Jersey's Saint Black arrived in my mailbox at the perfect time. Lots of early Dead C, early Smog (there's a track here called "Down to the Sky" which doesn't fall too far from "Sewn to the Sky" hmm...), Sentridoh, Stefan Christensen and Sacred Product have been on the turntable of late and the black Saint is surely trying to continue music history in that home-recorded trajectory.

Saint Black is lo-fi. Not lo-fi in the sense of conventional sounds on a meager budget, but lo-fi in the sense of packing his songs with all kinds of weird shit that you'd end up murdered for if you put it on a studio pop record. You can hear the hiss, so Saint Black rightly left the noise reduction switch in its off position on his four track. "Saint Body" is the weirdest moment with some strange out of place sounds littering the stereo spectrum. The song sounds like it was recorded standing next to a pneumatic paint shaker, and if that wasn't enough, someone starts banging on the door in the left channel out of nowhere at one point.

With a voice reminiscent of a Charlie McAlister-Calvin Johnson lovechild (this is an inordinate amount of Calvin Johnson mentions today) that kinda sets the scene for the style of these songs. Mid-tempo, drawn-out vowels, mundane yet quirky lyrics. You can certainly hear a Beat Happening vibe lurking in "What Passes for Gas?" and there's a self-ascribed "pacific northeast" tag on Bandcamp making me wonder if that's a knowing nod to the sounds of Olympia. Saint Black recalls another Pacific Northwest staple on "Full Cuck Press" which has a touch of the early A Frames sound when their finely honed cyborg rock was in its fuzzy embryonic stages

The record kicks off with a pair of highlights, the 25 second "I'm Tender" and the hit of the album "Touch No Evil" arrives afterward with an instantly hummable melody that's slowly papered over with all sorts of audio gunk. That's the one finds it way creeping into my mind unannounced. "Saint Vacation" shows that, when he wants to, he can play things straight and deliver a very nice low key pop number even if he can't help himself from abruptly sheering the track off at the stem with a harsh tape edit.

The Saint generally keeps things short (right move!) aside from the four and a half minute plaintive declaration of love, "Alex", which is nice but would gain potency in a slimmer frame. A couple of the tracks ("Laugh or Puke" and "Breed Concept") don't make much of an impression and unfortunately they arrive back to back, but Saint Black is onto something and, considering this is his first album, I'm really curious to hear where he goes from here and how he develops as a songwriter going forward. He's not afraid to wear his idiosyncrasies on his tape and that quality gets more refreshing by the year. 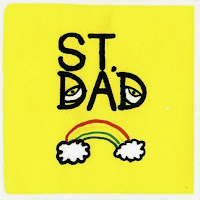 St. Dad - Do as I Say Not What I Do [no label]
Speaking of saints, I have the perfect segway to this month's baby/parent-themed review! It's the 10th anniversary of this parenting manual Do as I Say Not What I Do and by now St. Dad should be mentioned in the same breath as Dr. Spock right? Well... maybe not. These guys sound like they're 17 tops, but hey the world is probably full of 17 year old dads so who am I to judge? They hailed from somewhere in Florida but to my palette they have a bit of that Clevo nutwad flavor, like a truly dumb electric eels or, more recently, the brilliantly dumb Bad Noids.

They're probably not the best guys to be taking parenting advice from but they manage to get one or two things right on "Jobs and Junk" with observations like "Everybody's doing it/Jobs and junk" and "Pour another cup of coffee/Down my throat" because, man, dads get tired, especially at work.

The record sounds positively wretched which is right in my wheelhouse and, to be fair, the band is surprisingly tight and melodic but with a wild-eyed neighborhood tough like Gustavo on the mic, St. Dad takes on the same fly-off-the-handle character. His hyper-nasal, generally unintelligible sneer 'n whine is the EP's defining quality. Quite handily, the Dads offer up their lyrics scrawled slightly more intelligibly in a booklet. Without it, I probably wouldn't have realized the record ends with the immortal couplet "I've cut my own head off/Now I'm blind". These are some maladjusted lads, writing songs about selling their grandma on eBay and disturbingly, but fittingly, they save their catchiest riffs for their saddest track "The Unwanted Child".

The sleeve with a lovely multi-colored screenprint job is curiously professional looking, how'd that happen? Do these guys have a well-adjusted older sister or kindly aunt looking out for them? It's a  curious discrepancy that only adds to St. Dad's mystique.
Posted by Auxiliary Out at 10:16 PM No comments: