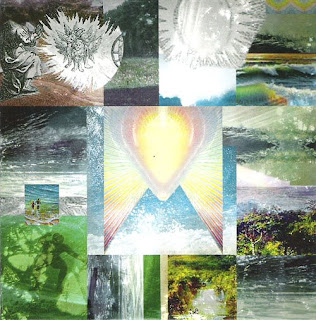 This CD-r is the first release of the duo Ixchel, the newest project by Tim Hurley (known for his work in AuxOut favorites Quetzolcoatl, Bonecloud, and the Leaf Trail label) and Barry Semple.
My favorite track starts the album off. “Landing Hallucinations” is drenched in sound (a characteristic of Hurley’s projects), thick with field recordings, reverbed synthiness and a distant harmonica. The title is fitting because the track sounds like oceanside audio hallucinations. The track is a bit on the meandering side but, to its strength, the guys keep it brief. The albums longest track “The Bubble Hiders & Rainbow Ocean” slowly builds glistening waves on top of each other including a ghostly piano and a muted but insistent percussive pulse before breaking off 3 minutes in, giving way to strummed guitar and glockenspiel. That combo in turn is built upon reaching a gentle zen. There’s a nice contrast/balance between sharper plinking sounds and smooth sustaining tones. Everything dissipates once more. A simple and amazingly hypnotic guitar passage leads the first half of “Globe of Leaves in Sky of Sea” before it’s augmented by piano increasing the hypnotic factor. There’s some non-effected vocalizing that crops up near the end as well. “Clockwork Castles”, after some quickly strummed electric guitar morphs into a languid dream pop tune. I’m really digging the accordion/harmonica/whatever that accents the track. Additionally, I like how, near the end, the background instrumentation shifts and discombobulates, subverting the sweetness of the vocal’s intent. “War Paint” is an extended interlude with clattering drippy sounds being blown at each from all directions. “Sun Bridge Believer” is another episodic track, the first bit is quite good though those uneffected vocals don’t gel with the proceedings an kinda get in the way rather than blending into the murky beauty of everything else. After the first part fades, the rest of the track is a dark little cavernous crawl to the light of “Dreaming New Colours”. “Dreaming New Colours” is quite a cool piece featuring a well executed tempo pickup in the second half. The vocals fit a little better here, but don’t quite find their place. “Surf of Awakening” seems like the companion piece to opener “Landing Hallucinations” and closes out the album rather abstractly with shoreside field recordings and lots of other sounds hiding behind reverb pedals. The album reaches its roughest, stormiest point with low rumbling jutting against a sample of breaking waves. The last few minutes achieve what I think was the goal of the album—to combine experimental/drone with more song-based pop type stuff—there’s a plaintive ballad trying breakthrough the aquatic cacophony but just can’t quite do it. And it’s sound rad.
I respect Ixchel’s approach to making music—they have the whole abstract soundscape down—but, on Dreams Of, the more “pop” elements, namely the vocals, are a liability more often than not.. However, based on that final track the guys are definitely capable of pulling it off and I’m betting on subsequent efforts they’ll have it perfected. Still the pros vastly outweigh the cons, and overall Dreams Of is another example of the uniquely great sounds that only come from Tim Hurley and his collaborators.
The CD-r comes in an oversized pro-printed slipcase with an insert and artwork by Hurley.
Posted by Auxiliary Out at 10:22 PM No comments: 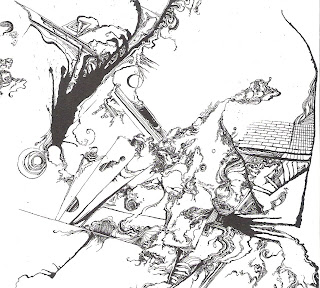 I'm a bit late on this one but no matter. This is the inaugural release on Pete Swanson’s pretty new Freedom to Spend label. Apparently this crew is a (electronic) drums and guitar duo and Pete assured me they even pulljavascript:void(0) this shit off live which is hard to fathom (though I found some proof on youtube).
“Gold Ropes” starts things off about the best they can be with a nice ten minute work out. It’s tough to adequately describe everything that’s going on but I can tell you it is a lovely menagerie of sound. I haven’t thought about Black Dice in a while but this track kinda reminds me of those guys when they were making stuff like Beaches & Canyons and Cone Toaster with the odd tumbling forth of sound but I wouldn’t say they sound like Black Dice per se. Bulbs is really kinda mining their own sound here; which is totally respectable and entirely awesome. It’s a bit airy and relaxing but not droney in the least, there is a constant (ar)rhythmic pulse and a mindboggling array of sounds floating by or spitting themselves at you. Over the ten minute runtime the track somehow changes vastly and stays exactly the same save for cloudy minute long outro. The track is an anomaly just like the band. “Wind Conditions” furthers the skittering, blippy beat dynamic of “Gold Ropes” which makes me wonder if they constantly jam Burial on road trips. The drums and guitar don’t sound quite find the unity they do on the previous track though. Guitar takes the lead on the brief “The Green Flash” and instills the album with a lovely, fleeting spot of beauty. “Swinsons” brings the beats straight ahead and really puts you in the zone before splicing the groove, crossing your wires and frying your brain. There’s a short guitar lick in there that sounds really familiar too but I can’t place it. Anyhow, it pops up a few times providing a melodic point to orient yourself in the ever shifting sea of terse tones. The title track is much quieter and more open sounding, based around a stuttering but lilting guitar figure that despite it’s reluctance to sustain any tone or rhythm is drowsily catchy. The duo is back to grooving on “Strickfadens” with a samba-ish thing crossed with a distorted techno, um, thing. It’s weird but an unsuspectingly great sound pairing. The guitar acts as a foil with heavily delayed high-end bleats. It starts busting heads at the end too. “Uamanas” closes the album out. The guitar/chameleon disguises itself as an mbira before turning itself inside out against a surprisingly constant and rhythmic fuzzy tom tom march. Everything accumulates into the most coherent offering of the album and certainly one of the better tracks before ending with a bit of solo guitar-as-violin action.
Light Ships is one the best albums I’ve heard this year because you can’t put your finger on it. Each listen is more mystifying and mesmerizing, making you think “I need to listen to this way more” regardless how often you do. Bulbs have successfully made an album with pop-sensibilities completely unpredictable. I don’t even know when the last time that happened was.
Swanson also mentioned to me that idea behind Freedom to Spend is to release very few albums and only ones he feels are of the highest quality. Based on this release, yr probably gonna end up owning the entire Freedom to Spend catalog. Speaking of which, Mr. Swanson has made it pretty easy for you to do so. This album seems to be pretty widely available and there doesn’t appear to be any of that limited to ___ shtick. The release itself is a professionally pressed CD in a digipak type case with radddd Comic book+Dali+Escher+Alien illustration by Matt something or other whose name I can’t make out due to the incredibly minute font. All in all it’s a handsome release.
Posted by Auxiliary Out at 9:00 PM 4 comments: