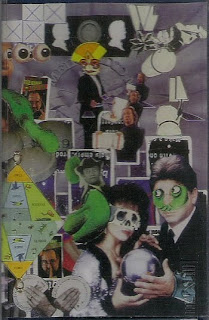 I went into this completely cold; all I knew was that Brandon Greter (edit: NOT Neal), who runs the Dream Root label, is behind Interstates Etc.
How pleased I was when I first listened though. I don't know exactly what Neal uses (some sort of mix of guitar, keyboard and electronics is my guess) but he's pretty adept at squiggly, energetic sound structures. A short intro piece familiarizes the listener to the pallet and from there the next piece is in a sort of haze, but not the kind you associate with dreamy music. It may just be a product of the quiet dub but everything's sort of a blur, weird pulses and the occasional drone all get whipped up into an ephemeral smear. In the second half of the tune Greter brings out a sound effects generator I remember playing with as a kid which breaks up the cascading whir. The next track manipulates a short rhythmic loop through all sorts of permutations with bits of electronic squelch curling around the edges. The track vacillates seamlessly between soft drones and crunchy rhythms while that effects generator makes an adroit comeback. Near the end, the track flips out into bee-boopery hell.
The second side starts out like a groaning, slo-mo feral dream. Weird synth-ish textures are squirted all over as the seasick tumult looms across cymbal fragments. The second is even deeper down the drone hole. Lo-fi pitch manipulation and loops make for a sonic equivalent of a lobotomized patient trying to escape his institution. All stumbles, slobber, and cloudy-headed stupor. The piece catches a second wind of sorts with a literally wind-like wandering drone that brightens things up incrementally. The last piece is less than a minute or so but it's the weirdest of the bunch (shards of strange beats, a broken down carnival tune; a touch like Angst Hase Pfeffer Nase stuff) prompting me to hope future Interstates follow this path further.
There's some interesting stuff on this tape, I'm definitely looking forward to hearing this project develop.
I'm pretty sure this is sold-out but Interstates appears to be pretty active so you should definitely have a chance to get learned. (Edit: apparently the tape is sold-out from the artist but is still "kinda" available from Fairchild Tapes)
Posted by Auxiliary Out at 6:21 PM No comments: 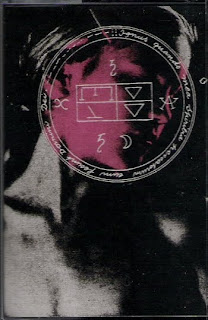 Lee Noble has been blowin' up recently with tapes on Existential Cloth, Bum Tapes and these two on Bathetic and Tape Drift. Its clear his often dreamy synthwork has justifiably gotten such respectable labelheads excited. Darker Half is the more lush of these two. It's fortyish minutes of clouds, keys and mysteriously soothing vibes.
Lead off hitter "Halloween Kiss" sets the bar high. After a nice hyperdrive intro into the piece, there's big billowing clouds of pink smoke to wander through. What I like about Noble's sound here is that even though its aiming for an out-of-body head trip it still sounds gutsy, there's a density to the sound. Nothing's clear but there's an omniscient guiding hand and there's nothing to do but soak in the vibes. There's a lot of underhanded movement throughout but I'm too busy melting into the floor to notice. Similarly to how we entered, Noble guides the piece into a minor-key area and slowly sucks us out of his world. "I'm a Skeleton" changes up the vibe a little bit with percussion of some sort intertwined with the wavering synthwork. What follows is hard to pin down. The cloudy choir of keys vibe is still present as Noble unearths some geological rumbles, elephant blares and a village of voices in the midst of it all. The tremors never subside for long. It's an incredibly unusual but beautifully envisioned and executed track.
The second side holds "Paper Mask" and "Sick for a Week". The former takes a slightly darker tone with repeated hi-pitched arpeggios and I think a bass guitar providing plodding, rubbery drones. Among the chiming of belltones, there's a sinister vibe to the piece, vaguely like a horror movie theme, that pierces through the fog. "Sick for a Week" is my favorite track. Straight-up, no-holds-barred synth romanticism. Working with a glistening synth tone that alternates between blooming and wilting with every cycle, Noble edges the melancholic piece with barely there touches of fuzz guitar and electronic percussion. It really is all about the sad-eyed soar of the synth though. A delicate and lovely piece to say the least. 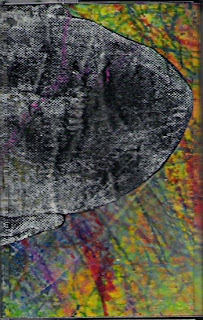 The excellently titled Infinity Bore is a slightly grittier affair by comparison. Opening with the eerie organ chords of "Slit Scan" Noble continues to inspire images of a somber, unmade sci-fi feature. He trudges along with that theme. The piece just swells from there incorporating cyborg groans and increasingly fuzzy keyboard drones. The piece is very operatic while retaining a certain urban grit as if the landscape Noble is sketching seems poetic from afar but the deeper you go the more queasy and frightened you get. Noble leaves you hanging on the warbly organ note he enticed you with at the forefront. "Fuck L.A." is a lovely keyboard orchestration couched in bursts of static. Murmuring vocals make for an unusually friendly Suicide-ish vibe, like a hobo wandering down a back alley, stammering to himself in Blade Runner L.A. It's short enough that it can qualify as a ballad so radio stations listen up. "Never Anything Ever" is a loping instrumental with an almost sauntering keyboard piece and insistent guitar clangs against the whir of electronics. "Fighting 31 Get Faded" is the tape's default epic and it earns that title too. Beginning with big swirling keys, stuttering fuzz guitar and the occasional interception of radio speech. The piece has that long form lilt that is quickly becoming Noble's signature. Many different sounds push and pull, scraping against each other but Noble manages keep them all headed down the same cosmic track with some unexpectedly beautiful moments along the way. Toward the piece's end it even begins to sway a little, getting caught up in its own modest magnificence until slipping away into tangled intergalactic interference. "Space Galaxy 24" brings up the rear with synth swoops and slow guitar strums. It's a 21st century slow burn drawing on synth music as well as Godspeed You! Black Emperor and minimal spaghetti western tunes. The piece ebbs and flows in a pattern with most noises choosing to ignore that route. Building humbly to a climax, it really hits the sweet spot at the conclusion. Drones of the best sort, ones with shape.
Initially Darker Half won me over instantly, but lately Infinity Bore has maybe usurped the top spot. You can't go wrong with either.
Bathetic is already sold out of its 40 copies of Darker Half but it looks like Tape Drift, which has been firing on all cylinders lately, is still stocked with Infinity Bore. Happy hunting.
Posted by Auxiliary Out at 10:34 AM No comments: 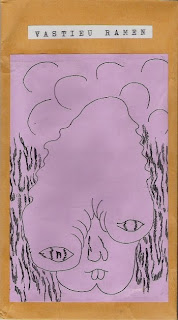 Unfortunately the Bonbon Bruises label is now defunct and we'll all have to lean a bit harder on the few other Canadian outposts peddling tapes and weirdo wares. It's sad this Vastieu Ramen tape is among the last but, still, it's a great note to go out on.
I don't know anything about this band but all evidence seems to point to them hailing from Japan. With probably each track coming in somewhere under two minutes on average, this is a frantic scrambled mess and a great listen as well.
The group mostly ends up in the free/no wave/Skin Graft end of the spectrum with a bit of the classic Boredoms zaniness. They don't keep anything off-limits though."Scramble Egg" is the name of the first track and what a great image to have in mind for the whole tape. It's mellow and foreboding with electronic rumbles, random percussion, repetitive guitar hammer-ons and, coolest of all, eerie whistling! "Toron" makes a bigger splash with thundering toms, twisted vocals and skronky guitar riffs. The song flirts with a full-on freak out but ultimately restrains itself even putting in a nice guitar and bass duet. "Haidetekuru" is brief, all atonal false starts. "8 Panics" is a stand-out due to a loping bass line and Nick Cave circa '82-style vocals. The guitarist throws in all sorts of weird licks, sometimes machine gun-like sometimes like a whimpering animal. Then the drummer changes things up to a hearty groove and the band locks while the vocalist shrieks "Itsthenumbereight!" as one word. "Hike in the Dark" is real weird, chopped and screwed vocals and lots weird electronics burbling around and even a Greek-sounding lute thing. There's also something that sounds like the bastard child of a saxophone and a Commodore 64 too. It's a well-done piece which isn't always the case when rock bands try their hands at noise. "Chouhoukei" rolls along on a loop for a while before shifting into a new set of soaring loops before moving back into a thick minimal beat with guitar noodling overtop. There's cool stuff in it but I miss the tightly coiled energy of the other tracks. The accompanying track listing has mathematical errors so from this point on I'm not quite sure which name belongs to which track, there's another brittle bundle-of-nerves jam that could be part of "Chouhoukei" or it could be "Gekirace" and the last piece of the side, a short interlude, is maybe unlisted. It doesn't really matter at all, and any confusion adds to the fun.
The second side starts out with the immaculately titled "The Guy Who Cut Himself in the Neck 3 Times in Brazil" and with a name like that the music hardly matters. It's a pretty weird jam. Agitated shrieks, free-form guitar and drums, and mega-80s keyboard swells coalesce into no discernible form. "Moron" (perhaps a thematic follow-up) is built upon its basslines and the sometime raving up/sometimes cooling down drumming. "Telepathy" is a collab with V's who I think may be contributing guest vocals, which is only one element that makes the track great. It seems more developed, with all the instruments locking into the universal skronk and throwing in a few trippy melodies as well. "Dummy" (yeah there's gotta be a theme here) also relies heavily on the person jamming on the bass with drums, vox and guitar making their occasional stabs. The vocalist is totally drawing on "Acid Police" too. "Ajinomoto Marina" the first of two Nokoinoko covers, is a great theatrical, keyboard-and-silly vocals jam that's way too short. Luckily, the other cover follows close behind though it's also deathly short. The instrumental title track has almost an A-Frames style repetitious minimalism before getting looser and launching into a queasy groove. Closer "Grypton" is a short instrumental of squirty synths bubbling up.
Toungue Night is a fun tape and a welcome subversion of expectations when I first popped it in (I was expecting something much noisier.)
Comes in a manilla envelope with paste-on artwork and an insert of a giant packaged tongue from a supermarket. Kinda disgusting. Only limited to 40 copies I think, I'm not sure where or if copies are still available but the ol' google search might help.
Posted by Auxiliary Out at 8:45 PM No comments: