“Made by Mermaids” Orphan Fairytale Split (with Pocahaunted) (7") [Release the Bats, 2008]

mp3: Part 1 Part 2 (note: the recording of this show is a really shitty mono mix. I had a breakdown with my previous way and had do it another way. However, I discovered yesterday a new way to get recordings of the show which should be of higher quality than the ones I've posted before, still working the kinks of that but I should be able to replace this crappy mono version after I get that way working. So, I guess what I am trying to say is, sorry for the shittiness of this recording.)

Posted by Auxiliary Out at 10:14 PM No comments: 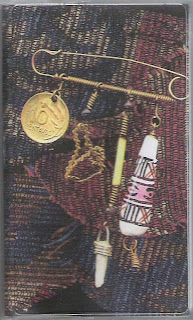 This tape is probably my favorite of the last batch to come from the JK Tapes emporium. I’d never heard of John Thill before (or after) and with a name like The Sluts I couldn’t help but worry it would be harsh noise of the shitty variety. How wrong I was. Remember kids never judge a tape by its title, you might regret it.
So what was actually on the tape? Pleasantly disturbing (or maybe disturbingly pleasant) sounds of a singer-songwriter recording in his bedroom. Each side of the tape has three tracks, the first of which is the title track. After a brief high note riff, guitar and voice pour out of the speakers like the loudest purr or quietest roar you’ll ever hear and it sounds absolutely killer! I hope this guy keeps recording with whatever magical boombox/recording device he uses, cause the poor quality causes his voice and guitar to blend into soft, slightly murky waves of sound. It’s pretty fucking beautiful to my ears. Anyway the first track is over too fast and without even stopping his recorder Thill launches into the next song “The Poses”. He’s singing about a girl I think but I can’t really make out the lyrics. That doesn’t really matter cause the best part is when it ends with an elegant wordless refrain. That one is way too short as well and pretty soon we’re on the third track “The Good Men”. It sounds like maybe he did some voice overdubbing on this one and it has a nice chorused effect. But seriously the track is like a minute long, it’s over before it starts. I need more John. The real nice thing about this tape is Thill just has an intuitive knack for the way melody works and how voice and instruments interact without falling into any conventional traps.
The second side is stronger and more developed, beginning with probably the best song on the tape, “Vow”. The lyrics are much clearer in this track and really sexually explicit causing me to wonder what I am missing on the previous side. He does some more vocal overdubs on it too, and they are all a little bit offbeat which adds a nice pseudo-panning effect to the track. “Webcam” lets the guitar take the spotlight a bit with an extended intro alternating between two melodic sections which are referred to and developed wonderfully into an outro at the end. The finale “The Divorce” has a bit of a mid-90s alt rock vibe to me though, I could never explain to you why. There are some weird, atmospheric effects and whatnot overdubbed which contrasts nicely with the strongly defined songwriting of the track.
Though the tape is billed as a c25 it’s a bit shorter than that unfortunately. Though, since its pretty much infinitely replayable—especially the second side, the short runtime means you get to listen to it that many more times. I’m gonna keep my ear to the pavement and watch for more of Thill’s stuff. The tape comes packaged in typical JK Tapes fashion, with a labeled tape and a foldover j-card with a vaguely southwestern Indian vibe. It's sold out at source as everything from JK Tapes always is but there’s probably a few copies floating around distros so check there if yr interested. You should be.
Posted by Auxiliary Out at 1:41 PM No comments: 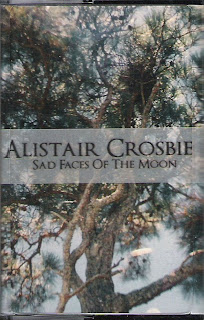 The review portion of this blog isn’t dead just deceptively dormant (I stole that line from the Jyrk dudes). Anyhow, it’s been ages since I’ve reviewed anything and I feel like a douchebag. But the good news is I have this killer tape to share with you.
I don’t know anything about Alistair Crosbie other than my friend may have seen him live at some point, so I let his tape do the talking. Lucky for me, it sounds real nice. The cassette is split evenly with two 14 minutes halves but the trick is the A-side is all vocal while the flip is all keyboard. The two sides still feel very unified which is a nice; fluidity is a good characteristic. Especially when you’re dealing in drones, which appears to be Crosbie’s favorite way to play.
“Side A” despite being all voice sounds insanely alien. I mean, I know people have effects and whatnot in this day and age, but it’s hard to believe the sounds on here originally came from a human. The side is really chilly and placid, reminiscent of the more sedate numbers of Double Leopards when they were still operating. There are some rhythmic-ish loops but they’re buried about six feet under so you’re really only hearing their ghosts. I feel like I’m on a phantom beach letting waves wash over me. Mostly the water is gentle but occasionally I’ll get splashed in the face by a shot of high pitched fuzz. Crosbie made a smart gesture putting “moon” in the title, because this tape is all moonlight and mist.
“Side B” is a bit warmer while maintaining continuity with the first track. It almost sounds as if there is an arpeggio going on but the track is so zoned out it’s probably not worth trying to figure out. A little way in though some other less droney sounds fade in. I’m having trouble identifying what they are exactly which is always a good sign. To me it sounds like a swirling but rhythmic bout of feedback being looped. But other times I think I’m hearing clipped up words or samples so who knows. The piece slumbers along until a pleasant comedown. I’m having trouble pinpointing a specific reference point for the track so I’ll just say it maintains an abstract rhythmic pulse without relinquishing any lunar droniness whatsoever.
The packaging is classy, top-notch style as is expected when you’re dealing with Peasant Magik merchandise. A clear tape with a printed label comes with a 4 panel color, fold-out j-card. It’s topped off with a tracing paper-like slip that goes over the cover and the tape with title, info and the Peasant Magik logo on the side so you can find it on your shelf with ease. Real slick. Limited to 100 but it looks like Peasant Magik still has a few copies so grab one before they are gone, because when Summer rolls around you are gonna be longing for that winter chill.
Posted by Auxiliary Out at 5:02 PM No comments: