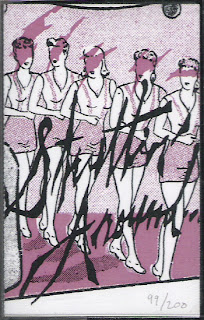 While I still have yet to discuss David Lackner's awesome solo tape, it's high time I get to this split he did with John Swana which is also pretty awesome in its own right. Galtta Media is an interesting label as it's got at least one foot planted pretty firmly in the jazz-world, and another planted in a place a little more mysterious. (Not to mention the fact that it's a jazz tape label, that's pretty dang unique) What's most interesting to me is, while I call it an experimental jazz label, I'd say no one would ever classify this as a free jazz label--at least not based on the material it has released so far. Often "experimental" and "free" go hand in hand, not the case here. Both Lackner's and Swana's work here tend to be pretty highly structured and melodically driven with an improvisational component. While working from a jazz framework, both Lackner and Swana create interesting and sometimes, in Lackner's case, ridiculously catchy compositions.
With "Layers, Layers" Lackner's side opens with seconds of friendly industrial music, what I mean by "friendly" is that the music is bright and in no way abrasive despite it's mechanized movement. Then Lackner launches into a series of lovely melodies via either horns and synths doubling each or synthesized horns. Victor North contributes a really great tenor sax solo that quotes, dare I say, The Sound of Music at one point or is he quoting Coltrane quoting The Sound of Music(?) Hell of a way to start a show. Another standout for me is "Thirteen" which features a pretty complex mix of interlocking synth melodies and a gorgeous twinge of a countermelody from a downcast saxophone.
Let me preface the next statement I'm about to make by saying I am paying a high compliment, "Study in Clutter" reminds me of some of the music in Disney's Mulan and it's pretty damn great. (Tangent: if you have not seen Mulan, do so it's one of the few modern Disney classics) Anyhow, getting off that tangent, the central melody in the track is this infectious, circular Asian-inspired arpeggio. Can't get enough of it! I do have to say I'm a bit ambivalent about the vocals present in the track though; give me the bouncing percussion, the catchy-as-all-hell Eastern melody and the crazy stereo-panned sax solo at the end and I am good to go--no vox required.
The hits keep coming with the also excellent "Fourteen" featuring synthesizers zipping around, darting between sax licks. Probably the closest the thing I can think of for a reference is Sean McCann's Phylum Sigh but that's far from putting my finger on it. (Maybe Golden Retriever if they thought they were a pop band???? Sheesh, I give up...) Elsewhere, Lackner plays Robert Schumann's composition "Im Wunderschonen Monat Mai" (!) replete with a nice sax solo and vocoder (!!) and closes up shop with the hyper "Fifteen." Pretty stellar side through and through.
Check this Lackner guy out if you haven't, he's doing some great work and in a little different way than pretty much everyone else I've heard in the tape scene.
While Lackner's side features many collaborators, John Swana does every little thing himself on his side from composing and performing to engineering. "3, 2, 1....Lift Off!" features an overload of twinkling and prickly tones before he starts tearing it up on his EVI (Electronic Valve Instrument; more or less a synthetic trumpet.) The more mellow and subtle "Thyme" features a tabla machine (or something) along with a series of idiophones garnished with almost smokey EVI exhalations. Pretty nice piece of work.
Although Lackner has a bit of a pop genius edge to him, Swana fits a little better into the "soundtracking" world; I can hear some inspiration from film and TV scores, and even forward thinking video game scores (on "Dark and Clammy.") It's not out of the realm of possibilty some of his stuff here could work as a (non-traditional) score, though Swana's work is far from the works of Max Steiner and Franz Waxman.
However, on "Major Man," the jazz influence is literal and readily apparent. Other than the facts that this is all composed from overdubs and sounds as if it was created entirely synthetically, this could be something you'd hear from a modern jazz quintet. The finale "Scene" is stranger. There's rustling field recordings and a synth drone creating a sticky little bed while Swana's EVI emulates all sorts of bird calls which are panned every which way. Weird track but I'm certainly feeling the vibe.
This is an interesting tape all around and has good bang for your buck value, with each player essentially contributing a half hour album. I'm more of a Lackner guy, if we're picking sides, but others may prefer Swana; either way both guys are doing some intriguing things.
You can purchase the tape from Galtta
Posted by Auxiliary Out at 8:52 PM