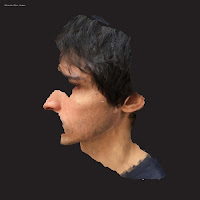 Happy New Year! Uhhhh... Well, quite embarrassingly, at AuxOut HQ we're kicking off 2019 in March. This one's been caught in the meat grinder for too many months now. But I promise you it's tops and well worth the wait. The record I mean, not the review. I never vouch for anything written on these pages.

When Kill Shaman puts out a record you always have to take notice and the LP Aa by Brazilian artist Ricardo Dias Gomes is their first release since 2016's essential jaw dropper by Heimat. Teaming up for Aa with Parisian label SDZ, who's no slouch in it's own right, makes a lot of sense considering the two labels released records by several of the same artists (The Rebel, Dan Melchior, and AuxOut favorites, Cheveu) over the past 15 years. Gomes stands just a bit to the side of that trio, however, forging an unquestionably specific aura within the grooves.

Forever late to the party, I was unfamiliar with Gomes's work before Aa, despite a heavily praised solo debut in 2015. My first encounter with Gomes was the music video for "Precipício" released summer 2018. (I excitedly called it "DAF in slow motion".) A gooey, grunting quease with an obsidian gleam, and it kicks off the LP in style. When I listened to the record I anticipated more of the same, and while you get "Tela Parada" which grooves with ease on a thick electro-throb and chopped up hand percussion, that's not totally what Aa offers. As a big fan of the DAF ethos I obviously would have welcomed revivalism in that vein, but Gomes serves up something more his own. A blend of agitation and gentleness, always proffered with as few instruments as necessary.

Aa is interesting to me because of this minimalism, but minimalism itself isn't all that interesting anymore, it's that Gomes is applying a trajectory burdened with pretensions to a short record comprised of, at their core, pop songs. (Pop songs to my mind anyway.) I'm probably overreaching using the loaded "pop" term as these aren't exactly verse-chorus ditties and their structures feature built-in abstraction. "Paranormal", for instance, is founded on a simple bassline. Gomes's vocals sit midway between a purr and growl. And it's just those two elements aside from a few bars of drums that pop up out of nowhere and disappear just as suddenly. Fittingly, after so much quietude a brief maelstrom of fuzzed out voice and guitar erupts at the end of the track.

"Partimos Daqui Pt. 2" follows suit but even eschews the trappings of drums, guitar, and distorted voice--anything remotely conceived of as aggression. A soft voice and electric bass in ballad mode, and nothing more. Just as "Partimos Daqui Pt. 2" fades, Gomes hits home with the biggest surprise of the record. "1 2 3 Nenéns" begins this time in full-fledged ballad mode with a downright lovely tune of finger picked acoustic guitar and a lyrical bassoon(?) line with Gomes showing off he has quite a nice singing voice.

Aside from that DAF mention, I've found it's a bit of a struggle to pinpoint specific comparisons for the record. I keep coming back to Young Marble Giants. Not a similarity in sound so much as rationale. Also, I'm surprised to say this but there's a distinct flavor of Kid A-era Radiohead (Kid Aa?) on "Fogo Chama" but Gomes chooses to undercut the somnambulist charm by inviting Arto Lindsay (DNA, etc.) to lurk in the shadows and lay down a bit of tasteful guitar skronk.

Aa clocks in around 20 minutes but you'll feel as if you've traveled much further. When dealing with temporal media, length is an aesthetic feature. For some films it's important that they run for three hours and for others it's just as important that they run for 90 minutes. It's no different with records. I believe that the enigmatic qualities of Aa would dissipate some had it run for 30-35 minutes. Gomes practices perfectly calculated restraint, giving the proverbial Listener just enough that it can't walk away after a single listen, or a second, or a third...

For a while I was spinning this everyday before work and before bed; Aa's either thoroughly invigorating or thoroughly relaxing depending on the time of day. Gomes has made a record that slots in perfectly to relieve us from this inveterate 21st century lifestyle of ours.

If you're stateside you can grab the record (cut at 45rpm for the audiophiles!) from Kill Shaman, in Europe you can grab it from SDZ or from the artist himself.

Posted by Auxiliary Out at 10:10 PM No comments: