Whoa... this is the first post since the pandemic-fueled lockdown here in LA. My family has been very fortunate; we are healthy and still have jobs but my wife and I have been working full time (in her case, more than full time) while also taking care of our ever-active one year old daughter full-time at home. All in all, we're very thankful to be in the position we're in compared to the desperate circumstances that have beset so many people. That said, it's been nearly impossible to find spare time (and, more importantly, energy) to allocate to thinking and writing about music. I've got a pair of very interesting LPs I've spent some time with over the past several months for today's post and then going forward I'm going to try switching to a quick-hitter format with short blurbs on releases. I'll try to corral my loquacious tendencies in order to get some kind of briefer AuxOut content out into the world, most likely in irregular intervals but hopefully much more often. Thanks to any and all who read the site, I hope you are staying healthy and enjoying music every day. 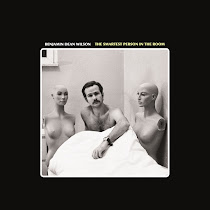 I’ve been wrestling for months with how to accurately describe The Smartest Person in the Room, the sophomore effort from Benjamin Dean Wilson, Tulsa’s turtlenecked troubadour of note. On one hand, it doesn’t sound like anything radical but on the other, it’s quietly the most ambitious album I’ve heard in that hazy bullshit genre we call “singer-songwriter” in some years.

The record’s release has a perfect story for some future rock-doc: Cincinnati’s Works of Love is a record label established by novelist Luke Geddes who used part of his book advance to start the label (badass) and serendipitously came across Wilson’s debut LP while browsing eBay listings for Jonathan Richman records. An impulse purchase led to Geddes falling in love with Wilson’s music and offering to make his follow up the inaugural release on Works of Love.

Wilson’s reedy vocals, somewhere between David Berman and the tinny tenor of James Taylor’s voice, belie the density of The Smartest Person in the Room. It’s verbally dense (the word count for each song must be stratospheric) with tastefully orchestrated arrangements that can keep up with the cavalcade of vocabulary. There are so many blink-and-you-miss-’em melodic nuggets crammed into this record that it’s far too overwhelming to try to capture them in this review. However, one of the keys to Wilson’s production is that, despite the wide array of instrumentation—we’re talking guitars, bass, drums, piano, viola, organ, synth, multiple male and female voices and more, he maintains a very spacious, naturalistic atmosphere for the album.

To call Wilson’s tracks merely “songs” is almost a disservice as they are long, winding narratives of quotidian snark with ever shifting arrangements for each act. The Smartest Person in the Room feels like a collection of short stories nearly as much as it feels like a record. With songs usually unfurling to 7-10 minutes in length, Wilson often ignores verse-chorus convention opting for constantly evolving movements. Probably too literary to classify as pocket symphonies but structurally there’s a symphonic element at the core of these songs. Clocking in at just four minutes, “Ridgemore Hotel” sticks closest to typical pop song format but even that’s chock full of little key shifts and detours.

Positioning the title track as the opener is a smart choice by the smartest person in the room as it's the most immediately hooky (I was singing the ambling “I come from a family full of idiots” chorus to myself after a single listen) and nestles into a comfortable middle ground between Wilson’s firm grasp on pop songwriting and his more grandiose gestures that arrive in short order. The rest of the album ranges from the beautiful chamber music vignettes of “Mr. Paranoid, Lizzy, and Her Family”, the ten-minute finale of “Vitamin Supplements”, an amusing epic of con games and rackets, and “A Difficult Decision for Ronny Giovanni”, a comical minor key funk tune about the modern day descendant of Don Giovanni.

Wilson’s best work comes on “Won’t Say It Again...” a wry, disturbing portrait of an immature (and deranged) schmuck who can’t fucking deal with being separated from his ex-wife, all the while proving exactly why she’s better off without him. The song winds through the narrator’s bizarre stream of conscious including how butchering a deer reminds him of his ex-wife, straining to live in a movie flashback of his life and, ultimately, in a final unnerving kissoff, the resolution to hold his feelings inside and give his ex-wife’s address to a local serial killer. It might be Wilson’s best work as an arranger as well, finding various combinations of timbres to underscore the fluctuating tone from segment to segment, including an unexpected, hummable harmonica-led conclusion.

As alluded to, The Smartest Person in the Room is a dense record and after many listens I still notice new lyrical and aural details in every song each time it’s on the turntable. Wilson is truly doing his own thing; his peculiar voice (literally and figuratively) stands out from the leagues of forgettable singer-songwriters out there and that is so goddamn refreshing. Thank you. 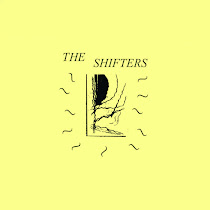 Melbourne’s The Shifters' boastful, pie-in-the-sky online dating profile would describe themselves as Desperate Bicycles-meets-The Raincoats-meets-The Fall. This sounds like the best band that ever existed, certainly on par with using an eight-year-old profile pic. Except, in this instance, it's actually pretty true. The other reference point is mid-80s Flying Nun, think pre-Terminals bands like Scorched Earth Policy and The Max Block. If DigiRegress had pulled the wool and said The Shifters’ debut was a reissue of a cassette from 35 years ago rather than five (the truth), I'd be inclined to believe them. This LP miraculously sounds like it came from that era, one of the best in history, and I desperately want to know how this feat was managed.

So The Shifters sounds like a million, but what about the songs? Well, they’re pretty fucking impressive too. Eight killer songs with no filler in sight. Each one is a hook-laden, instant-classic in its own way. The first two tracks “Creggan Shops” and “Captain Hindsight” made it as the A- and B-sides of a single in 2016 and it’s easy to see why. “Creggan Shops” seems like The Shifters’s mission statement if there ever was one. It’s got the fixation on areas of colonial strife, in this case Ireland, (songs “Algeria” and “Tel Aviv” appear later on the side) evoking brutal images of kneecapping alongside clever esoteric puns (“R.U.C. again and now you don’t”), over a scrappy brew of stepping guitar riffs and melodica wheeze. “Captain Hindsight”, alternately, breaks into an utterly gorgeous violin melody over murmuring bass and needly guitar thrums. The band ratchets up the tension on “Algeria” with a descending four-note bass line and thumping tom pattern. Vocalist/lyricist/guitarist Miles Jansen is impeccable on the mic and his sloshed Aussie accent sounds more on edge than usual here.

VU’s “Heroin” has many, many great grandchildren by now and The Shifters add another to the litter with “The American Attitude to Law”, working the extended two-chord format into their own style while singing about sliced achilles tendons, suing the internet and namechecking YouTube to timestamp it in the 21st century. “Benedictine Man” must be about Benedictine monks, I can only assume given Jansen’s historical proclivities, and it showcases the catchiest chorus on the record (you will be hollering “He was a Benedictine man!” in no time) with dual guitar riffs to match. The country-fried “Colour Me In” has a strong whiff of The Statler Brothers’ “Flowers on the Wall” without actually sounding like it and if “Algeria” seemed intense, the band really gets their blood pumping on “Stuck in the Middle” about as full-throttle as the ragtag group gets on the album.

In addition to the quality of the songwriting, the performances are perfect across the board. Drummer Ryan Coffey isn’t afraid to ignore his cymbals and even his snare occasionally giving each song a fresh rhythmic center while the two guitars and bass expertly intertwine loose, twangy single note lines maintaining space and allowing each other to stand out at different points. Angus McLean is The Shifters’ secret weapon playing both violin and melodica, wringing out all manners of lyrical melodies, rhythmic plucks and occasionally sawing skronk. If the rest of the band is the bones, he’s the flesh “colouring” the band in.

I remember seeing The Shifters tape pop up on several best of the 2010s lists which inspired this purchase and, for once, the lists were right! Do I have a new favorite band? I just might!

Much gratitude to Digital Regress for bringing this gem stateside. Right now DR is having a moving sale (20% off everything) so you can grab The Shifters along with other sweet Antipodean (and American) sounds for some low, low prices. Buy it.
Posted by Auxiliary Out at 10:18 PM No comments: