Natalie Rose LeBrecht - Mandarava Rose [Galtta]
Galtta Media is one of the more consistent purveyors of experimental sounds having defined an electronic- and jazz-tinged forcefield around itself yet still find ways to subvert expectations. Last year's Nick Stevens tape came out of left field (yet somehow made perfect sense) and I loved it. Now we have this tape from Natalie Rose LeBrecht and I feel the same, it fits right within "the Galtta sound" while feeling like a departure as well.

This is a heavy tape, it's probably 70 minutes long so you gotta clear your schedule to give it the proper attention. Not difficult listening but demanding, and certainly affecting, in its way. Uneasy listening, shall we say. It's worth taking the trip if you can swing it though because it's a heady one, and easy to get lost in if you allow yourself to.

LeBrecht drizzles layers of acoustic and electric pianos, organ and voice on top of one another creating this whirling, swirling, twirling vortex of sounds in space. With an opening title like "Rishi Stars for Turiyasangitananda" it's evident that Alice Coltrane is an influence, but LeBrecht is on her own tip, exploding notions of what a pop ballad can be rather than jazz. The eleven minute jaw dropper "Rosebud & Lotus" is baroque pop in slow motion, feeling alternately like you're paralyzed in a foggy piano bar witnessing a blurry chanteuse waft wispy croons from the corner of the room, and sinking deep, deep into your chair in the cinema as the lights exponentially dim save for the glowing tableau enveloping you, offering some metaphysical communication you can't parse. David Lackner joins on wind instruments providing subtle accents but it's really LeBrecht doing the heavy lifting here, concocting such sorcery with a deft pair of hands.

Another highlight, "Autonomy Dream", is a wonder in its own right, with LeBrecht pushing her voice further into a higher register supported by a funereal organ melody replete with a somber sax solo by Lackner. LeBrecht is equally magnificent when not unraveling lengthy tendrils of sound over 10 minute run times. "Hear Today" winds down the tape in under four minutes with LeBrecht wistfully exhaling over a simple arpeggio before drifting away amid organ gleam and a rattling flute.

All in all, Mandarava Rose is a mysterious, transporting tape that I'm nowhere close to fully exploring but I'm comforted knowing I'll be rewarded each time I return to it, continually discovering new alleyways to slip down for years to come. 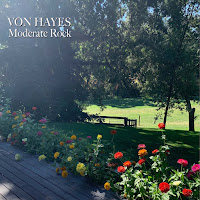 Von Hayes - Moderate Rock [no label]
This is my first encounter with Von Hayes, apparently a band involving Graham Repulski. I wrote about Repulski and his impressively bang-on body swap with Bob Pollard on Success Racist here and Von Hayes seems to add a Tobin Sprout to the equation as two singers trade songs on this one. (The other guy sounds like Colin Meloy from The Decemberists without the shtick.) As one would expect Von Hayes doesn't fall too far from the Graham Repulski tree which is cradled right between the roots of the GBV grand oak so that's "the sound" here. Although, Moderate Rock is lo-fi in method more than aesthetic as the recording is pretty clean overall. The arrangements are simple, usually two guitars, voice and a simple drum machine track (though some songs feature live drums) and that's it. It's a tried and true formula that has worked (and alternately not worked) time and time again.

True to its title, all the songs on Moderate Rock are solid and easily digestible but most don't particularly stand out. Nothing soars like "James Run" on the Repulski tape I have. However, in its second half the album hits its stride, starting with the highlight "Pissanthemum" (for some reason the CD features a few titles belonging on a Bloodhound Gang album like "Urinal Cookies") which takes things to an even simpler place than usual with finger picked acoustic guitar and electric guitar feedback backing up the best vocal performance of the album. "Man of Few Verbs" is an uptempo college rock ditty with a catchy guitar riff. "Zeroes and Victims" splits the difference somewhere in between the previous two, making for a nice string of hits in the album's closing frame.

If you're unfamiliar, I'd recommend tracking down Repulski's Success Racist first before moving on to Moderate Rock, but if you've got that eternal itch for early 90s era college rock like I do, Von Hayes does the trick, sounding especially good on the car stereo during the commute home. 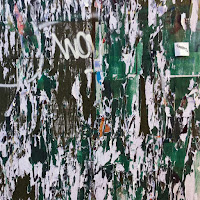 Brandy - Laugh Track [Monofonus Press]
This team up of Running and Pampers members (now there's a band I should consider reviewing for the baby-themed AuxOut segments) sounds exactly like you'd expect. That's a good thing in my book as Brandy retains the relentless ground 'n pound DNA of both groups. The bass player from Pampers and bass player from Running both play here but it sounds like one picked up a guitar (I'm guessing Matthew Hord of Running is the one who stuck with the low end here).

Despite the mathematics of porting over only one member of Running to Pampers' two, Brandy hews a little closer to Running even though they ditch the neverending feedback for a tight, precise sound. I don't hear as much of the garage rock influence present on the Pampers LP which I'm all good with, 95% lean noise rock action is how I like it.

"You're a Dentist" (an oblique Punch-Drunk Love reference I'm hoping?) kicks off the record with thumping drums and fucking shakers! Drummer is groovin' for probably a full minute before the bass starts rumbling. It's one of the best intros to a noise-rock record in recent memory. Pretty much every track relies on the same tried and true formula of two or three note riffs repeated ad infinitum, unintelligible vocals, with occasional guitar solo/feedback moves as the trio stomps every toe they can on their way to the back door. They're all good but it's hard to pick out one from another. (The penultimate and accurately-dubbed "Urgent Blowout" is pretty gnarly though.) In total, it's a twenty minute 45rpm drubbing and you're out, certainly with a few more bruises than before.

Brandy isn't doing anything especially new—Mayyors, Lamps and any number of other bands with a similar ethos come to mind—but it's doing it really well. Keep shakin' boys. 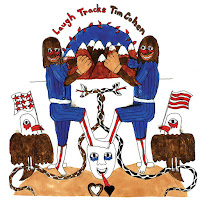 Tim Cohen - Laugh Tracks [Captured Tracks]
From Laugh Track to Laugh Tracks, this month's baby-themed selection, though not limited to simply babies this applies to all parent-child relationships—and probably beyond those as well.

Penned and sung by Tim's dad Robert Cohen, "Small Things Matter" is an ambling piano ditty I came across on an old episode of a radio show on my drive to work; I was singing it the rest of the day and thus had to track down the record or I'd surely die. "Small Things Matter" is a rare song that I come across far too infrequently. An expression so heartfelt and genuine, devoid of any pretense or irony, that it achieves a sort of universal purity—and I say this as a person who believes that nothing is universal.

The older Cohen ruminates on the difficulty of explaining all the bad shit in the world to a child: how can you be truthful without things sounding so hopeless? His solutions are things like doing small favors for your neighbors or lending "a helping hand to someone further down the ladder" because small things do matter. It's hard to keep it together after the final couplet "Small things matter/Give a sad face laughter" as I think of my daughter and all the joy she brings to everyone who encounters her. I have an inkling you'll feel the same about one of your loved ones as well when you hear it. I can only hope she'll want me to sing a song like this with her when she grows up.

Laugh Tracks is a really solid pop record worth hearing but it belongs in the home of every family because of this song.
Posted by Auxiliary Out at 10:35 AM No comments: