Alright so bear with me, this project is from western Canada, has a French moniker and writes its titles in German. Maybe that person who first theorized about globalization is onto something after all.
This tape is harsh harsh harsh and if it was any longer than 20 minutes some serious damage might be done by these aural icicles. The first side "Deutsch/Weiss/Heterosexuell/Reproduktionsbereit" is seriously prickly. There's not much low-end just a rage of metallic daggers. This might be the ethereal version of harsh noise as it seems to float, untethered. It's a poisonous cloud. It shimmers while it thrashes. It tickles as it stings. This is the midpoint between peeling an onion with a cheese grater and exfoliating with a cheese grater. This is acupuncture with rusty nails. Well, you're probably getting the idea. I particularly like the end of the track where the reins are pulled a back a bit and the momentary relief makes the affair all the more unsettling.
The second side "Politisch Unauffaellig/Produktiv Arbeitend" is more forceful. It's actually trying to clean your clock instead of tease and torture you. Ear-splittingly and unapologetically rough, the track could probably cut you up a few different ways but it prefers just the one. It can cut deeper if it keeps stabbing the same wound. Total sonic wreck. Positively murderous.
I appreciate the no-holds-barred/no-fuckin'-around attitude of this tape. If you're in the mood for punishment, it's happy to oblige. And really, all self-respecting listeners out there enjoy getting the shit beat out of them sometimes. This is one of those times.
The tape is self-released and pro-dubbed chrome so its spikes are extra sharp. Get it here
Posted by Auxiliary Out at 7:47 AM No comments: 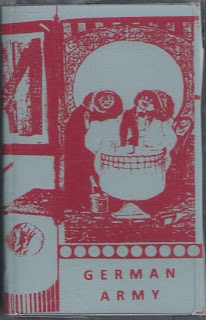 I'm not sure who this German Army is that keeps sending me tapes (well apparently it's two people named Chin Genie and Meatball Maker,) but I hope they don't stop. I wasn't even sure Germany was allowed to have an army yet after that whole World War II debacle.
First, they sent Body Linguist on the Danish Skrot Up label. Then they followed up with Papua Mass on the renowned Night People label. I like the first tape but I LOVE the second. I'll say it right now; these guys sound a ton like Excepter but, if you ask me, I think they're probably better. That's no insult to Excepter, just my feelings bro. Anyway, onto Papua Mass...
"Guinea Strong Arm" sets the tone. Hypnotic two-tone xylo-synth loop, dark organ melody, an ominous cascade of guitar swells and sloshed vox uttered through four or five pedals. The recipe is simple and seriously fuckin' potent. "Calypso Host" is a mess of echoing and/or reversed drum machine emanations. It grooves like a cripple, I don't know how it stays on its feet. Queasy synths roll in over the stomache-churning bass line as the singer dude drools out "I can't see the future." Perhaps not, but you're definitely onto something. This track reminds me of some of the stuff on Liquid Swords and that right there should send yr ass on a quest for this cassette right away. The cave-like "Nonsecular Wall" is consumed in a dank mist of reverb making it the most smeared track on the side, like hearing a drum circle down the longest hallway in the world. In classic iconoclast fashion, the side ends with an annoying stuttering that goes on for far, far too long.
The second side features "Tan Lines" a total Forbidden Planet-goes-dub jam. Primitive synths boop and streak over an echo-chamber snare. "Folded Skin" gets the most minimal of all with a pair of barely-there keyboards, until a flanged march fades in. A two-note bass line starts up adding a pulse to the strangely sparse arrangement. The vocals get the full chop/stop/screw/repeat treatment against an elegant, slowly building bed of synth-tones/samples. The closer, "Roman Lover" sounds like a slo-mo club track. An insectoid synth-loop burrows its way into yr brain underneath the spoken word story of disease. One of the real strengths of this tape is the way German Army never overdoes anything; they understand when they only need 2 or 3 elements to get their point across and when to expand the palette for effect, as in the final minutes of "Roman Lover."
All in all, this shit is really good. It sounds like some other stuff I've heard but I'm not sure if I've heard it done this well. German Army finds the delicate balance between junk-dub abstraction and actual listenability. To the German Military-Industrial Complex, keep pumpin' these motherfuckers out. I need more. 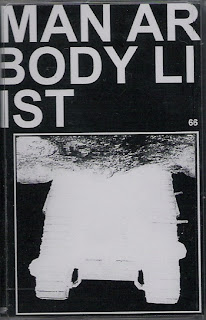 Gleefully demented, Body Linguist sounds like a predecessor to the more "refined" Papua Mass. Kicking off with the loopy "Earwigs" the first of 9 tracks to fill a 15 minute side, German Army makes no secret about the fragmentary of nature of the tape. "Horn Head" seems to peter out right when it hits it's stride. Same for a highlight, "Great Basin." The glowing embers of the keyboard melody in "Slave Worship" seems to promise a full-on move into "song" territory but instead it yields to the chilly keyboards and bent synth squeaks of "Ottoman Nurse." "Sick Standard" is rather raucous with a fuzzy synth riff and a menagerie of electronic pops and splashes. "Natural Space Skin" mashes some square pegs into round holes and "Throat Bender" chooses to fill the sound spectrum with sustained keyboard tones and heavily effected drum machine. The final track, "Peeling the Foot," is probably the longest and benefits from the length. It's given a bit of time to unfurl itself even if the ground underneath its feet is constantly shifting. The vocalist trails off and the side is over. The program repeats on the next side.
Body Linguist begs for an extended cut or for Germany Army to "remix" it or something. There's tons of great material throughout the tape, and while I respect the fragmentary nature, I can't deny it always leaves me wanting more of it and more from it. Maybe this was a trial run of sorts before moving into the longer songs of Papua Mass but as I said, there's lots material here worth developing or refashioning in future endeavors.
Definitely check this band out, Papua Mass is the first must-hear of the year from my perspective.
Posted by Auxiliary Out at 1:17 PM No comments: