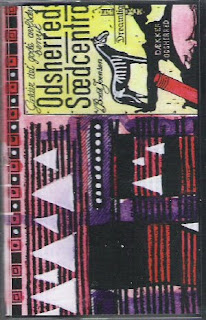 Northwest cassette team-up between Seattle trio Extraordinary Pigeons and Portland's Regosphere.
In addition, to graphic noise experiments the ExtraPigeons can deliver some real nice, brooding all-acoustic drone pieces, as they do here. It reminds me a smidge of those good ol' days when GHQ was ruling the blogs and Soulseek. Despite the acoustic clue, I'm not exactly sure what instruments are in play here, they all sound pretty otherworldly my guess is they are probably more out-of-the-box than "guitar & viola" or something. Maybe some bowed cymbals? There's something super deep and dense, I don't know, bowed timpani? Is that even possible? Either way, it's a pretty sweet caveman meditation, plenty of smoke from the fire pit and some hallucinations to go along. After the eerie environment has been pretty well established, a guitar provides a few plucked notes that even resemble a melody. It mingles with the spirit voices for while before an ultimate ascension to a new realm.
Regosphere a.k.a. Andrew Quitter is a name I feel like I've heard around for years but this is my first experience with his sounds. I think he runs Dumpster Score records but I'm not positive about that. The material on this tape was recorded with analog synthesizers and shortwave radio although it's not a cosmic journey of synthpads and static messages intercepted from other planets. This is noise motherfuckers. From the get-go, Regosphere grinds like a stalled jet engine. Turning over relentlessly. After establishing the thump-thud-thump-thud dynamic, Quitter takes things up a notch with some analog freakouts and alarm clock/telephone ring bleats and then cakes on the static like he's pouring concrete. Every so often there's a hint of melody buried 50 feet below but you gotta listen for it. Instantly grabbing your attention, the second track is even more aggressive with some pissed off insect leading the charge. It chugs and chugs with a perversely hypnotic rhythm. Nice!
May still be available from Pigeon Coup International
Posted by Auxiliary Out at 5:23 PM No comments: 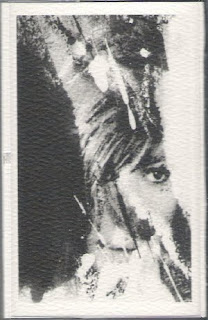 Robert & Leopold has put out quite a few high-quality cassette editions by various noise artists in its short lifespan but this tape by Norwegian artist Lasse Marhaug just might be my favorite. The crisp, sparse visual design is a perfect complement to the sounds within. As the title suggests, this tape is a document of a live performance on May 20, 2011 at the Angelica Festival Internazionale di Musical in Bologna.
To be entirely honest with you, I don't recall ever hearing any of Marhaug's solo work prior to this tape but I love this stuff and I love Marhaug's style. There's so much space in the sound spectrum and Marhaug attacks it dynamically. Metal fragments clatter and jangle and deep bass tones percolate all in a bitter, uneasy air. The first fourth of the tape is probably my favorite, particularly because I love its restrained, minimal arrangement. As Marhaug's performance progresses, more elements are incorporated; waves of static agitation eventually coating the circuits and ultimately subsiding, once again revealing a bewitching aural environment.
The second side creates a thick, twitchy base of, well, bass. Blurred violin appears after some time and, later, on the other end of the stereo spectrum, strings are scraped and ground to a pulp. Halfway through, Marhaug starts in with alarmed, synthetic oscillations to play counterpart to the acoustic mangling. This is over violin sustain, whose consistency gets increasing unnerving as all other elements go into severe seizures. By the final minutes crumbling electronics have engulfed the audience.
What makes this tape so great is its overall sound is more akin to a cassette of solo percussion. Acoustic instrumentation/experimentation, percussive and non-, is vital to the performance and major props go to Roberto Monari who did a fantastic job recording the performance with dynamic clarity. The tape is not particularly aggressive, which is one of its strengths. Everyone loves a good old-fashioned mauling but Marhaug accomplishes something more difficult and infinitely more engaging. The tape is all about the details, of which I've barely scratched the surface. You hang on every peak and crag, you relish the momentary drops into semi-silence and the controlled tampering of electric and acoustic sound sources. "Atmosphere" seems an ill-fitting descriptor in this case; I prefer "presence." Angelica sounds like the work of a master at his craft.
Gone from R&L, but I'd certainly recommend testing the distro market.
Posted by Auxiliary Out at 1:51 PM No comments: