In Brief #6: Totally Tired in the Dark at the Summer House in Blood Plaza

An eclectic bunch of releases that have made an impression over the past months...

John Swana, David Lackner, Mark Price - Smooth End of Summer [Galtta]
I'm really feeling this tape by the new (I think) trio of John Swana, David Lackner and Mark Price. Swana and Lackner have worked together plenty but I don't recall Price's presence on their previous works. Maybe I'm wrong, I'm a forgetful man. Anyhow, Smooth End of Summer is a really nice slab of space jazz--emphasis on the space.
The first full piece "Shades on Shades" introduces itself with a clattering hip hop beat but gives way to relaxed scales by a robo-Coltrane on muscle relaxers. Swana sticks mainly to his signature EVI, while Lackner handles saxophone and drum machine duties. The aforementioned new presence in Price contributes work on sampler and MIDI keyboard. It seems like Price is an important cog in this machine, take "Loner Tan" for instance, one of the most appealing traits is this thick electric mist pervading everything. Maybe its actually the EVI and I'm mis-attributing it but whatever it is, it sounds great. Sprinkled among the longer tracks are some great little interludes and short pieces. I wish the mere fragment of "Calm Palm"--18 seconds of gangly tribal drums--had been extended into a full piece--though considering they drop the track on both sides of the tape, the trio obviously knows it has value. The one minute "Seltzers Around" makes for a perfect transition between longer pieces as well. Among the longer pieces, the finale "Hot Noon/Avocado Shadow" must be my favorite as it leads you down the center of a dense whirlwind, then in the middle of the track the clouds part temporarily bringing into focus a great trip hoppy breakdown with a surprisingly infectious keyboard lick. This concludes the "Hot Noon" portion transmitting no omen of the demented melodies that will follow. "Avocado Shadow"... I'm not sure what's going on here, synthesized puppy barks, off-balance drum programming and more all in service of something I don't fully understand but I know is fully awesome. What a way to go out.
This is perhaps my favorite thing to arrive off the Galtta assembly line yet. Check it out here 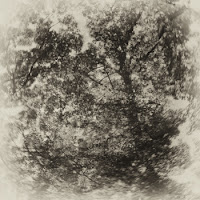 Good Stuff House - Untitled [Indian Queen/Holodeck]
A recently discovered pleasure of mine is Satyajit Ray's The Music Room. It's a 1950s Indian film about a fading aristocrat sinking every last rupee of his dwindling fortune into his one true pleasure--inviting musicians to play for him in his "music room"--while his estate falls into ruin. Maybe I'm just in a raga state of mind but this LP by the trio of Scott Tuma, Matt Christensen (Zelienople) and Mike Weis (Kwaidan, also Zelienople) is sounding really good. This record with no name has been rescued from limited-run CD-r obscurity by the good folks at Indian Queen as well as Holodeck who has reissued it on cassette. Originally released on Time-Lag back in the heyday of this Appalachian raga sound (think GHQ etc.)
The opening piece is still probably my favorite, the trio employing a hypnotic banjo melody, jagged zither strums and a sitar-y instrument of an unknown origin (bowed electric guitar?) making the air extra smoky. The track sounds, at once, like a frantic jig but also like its flowing in slow motion before blurring into a haze of warbling piano strikes and drawn out whistled tones. It's hard to pick out specific tracks as this feels very much of a piece--probably a good guess why nothing is titled aside from the ambiguous Good Stuff House moniker. That said, the fifth piece may be the hypnotic epitome of the record, locking into a mesmerizing zone almost instantly--three notes and hand drums become the truth. The whole record is drenched in atmosphere with a rare vitality and warmth that's easy to get lost in. This record turns an ordinary room into your own personal "music room."
Absolutely a lovely piece of work, certainly worth the change. You can nab the LP here and, if you're into portability, the cassette is for sale here. 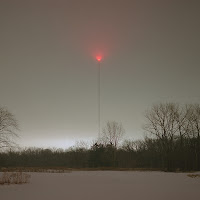 Kwaidan - Make All the Hell of Dark Metal Bright [Bathetic]
Speaking of Kwaidan, they have a recent release on Bathetic called Make All the Hell of Dark Metal Bright. Despite the title there's no metal to be found here. The trio of Andre Foisy (guitar/moog/piano), Neil Jendon (synths) and Mike Weis (percussion) concoct an interesting mixture of drones, rhythms and melodies. The record is placid in nature yet always teeming with energy. For instance on "Gateless Gate," Weis contributes steady, syncopated thumps that would drive a dancefloor in the context of another band but here cement themselves as a key support to the piece's minimalist architecture.
For the most part the record does not prove be as ominous as its cover (or title) suggest but things get pretty gnarly on "The Iceberg and its Shadow" which can hold its own with the iciest of John Carpenter themes. Foisy uses his chops honed in Locrian plucking out a simple piano melody dripping with dread while Jendon slowly swirls supernatural synthesizers around it like a fine fog (or poison gas.) My only complaint is the track is way too short, even at 3 minutes its not long enough. Seriously, I kinda have to recommend the record if only for this unassuming monster. But that's only the highlight of an album that's fucking solid through and through. Own this poison pen letter here 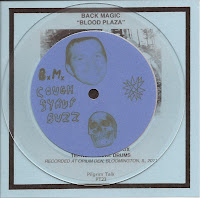 Back Magic - Blood Plaza [Pilgrim Talk]
Basement scuzz jams from this brotherly duo. The first side of this CD-sized 5" lathe cut features two takes of the title track, a straight ahead rocker. You can check it out below. I doubt it's intentional but there are a couple rad locked grooves on the first side of my copy. The first side is not the reason to buy this however, that would be the b-side. "Cough Syrup Buzz" is fucking awesome! Seriously fantastic punk track, monstrously catchy riff, bitchin' palm mutes and devil may care attitude to spare. Absolutely killer to a ridiculous degree! I hope this track makes it on to a more widely available release, it should be heard! Classic!
For the time being though, you can nab the limited lathe here. I do have to say that lathe cut is probably the perfect format for the rugged hairiness of the Back Magic sound. 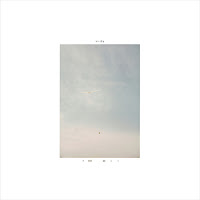 Mavo - Mavo [Fixture]
Last year I had a lot of complimentary things to say about a pair of 7 inches from Montreal's Fixture Records. This debut by Montreal-based Mavo makes good on the promise those earlier records gave. The trio's sound is really jangly and "classic." Very much in the vein of 80s independent pop. The two tracks on the first side, "Mock My Accent" and "Horrible Brit Pop Haircut" are quite nice. The former is a little more innocuous than the funny title suggests and its second half drizzles on some extra fuzz--kinda like if all those New Zealander pop bands played their guitars like The Dead C did. The latter track is particularly fun as it features the Japanese-born singer/songwriter singing in a mock Brit-pop accent over jangling chords, organ keys and rattling tambourine.
The real gem of the single is the lone B-side track, "Totally Tired." (Not sure why it didn't end up as the A-side--I would have swapped it with "Mock My Accent" on the track order but no matter.) Making lyrical references to both The Fall (obviously) and Velvet Underground, it also proves to be the catchiest tune on the record. Thumping drums right out of the Lou Reed/Mark E. Smith playbook propel the track along with a wordless two note refrain sealing the deal. Nice!! Grab the record here.

Posted by Auxiliary Out at 10:18 PM No comments: