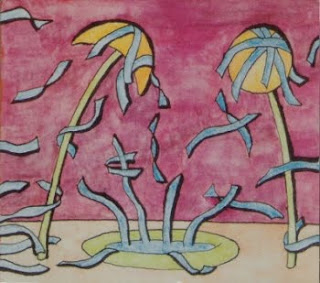 When it comes to jazz, I don't typically go for the smooth stuff or the soft stuff or cool stuff. I prefer things fiery, plenty of wrong notes to go with the right ones and well, you get the idea.
Enter new LA trio Rats whose music fits into the former camp much more than the latter and, inexplicably, I love this record. I don't know if this is "jazz" exactly, at least not how it's often conceptualized. It certainly isn't "soft jazz" or "cool" or any of the styles I mentioned earlier. Maybe it's "post-jazz" or something, but I don't really understand what that's supposed to mean. Anyway, screw genre labels and all that cause this is some great stuff and I'm just gonna go ahead call it jazz and be done with it.
Now that unnecessary intro/tirade is over, Rats is a trio of Eric Kiersnowski on baritone guitar, Jonathan Silber on tenor sax and Kelly Kawar on bass guitar. Eric and Jonathan both played in Godzik Pink, a somewhat similar but much more hyper and skronky combo, which was one of my favorite discoveries as a 14 or 15 year old. Anyhow, not really why I am sharing so much of myself here, onto the sounds.
The first of 11 tracks, "Milan Slaw" is a mellow introduction to the record. Guitar and bass strings intertwine as Silber contributes a gentle, fuzzy sax solo. They all break into a fantastic arpeggiated melody that is far too brief before allowing the rest of the piece to languish lazily in the warm sun. Silber delivers another great solo as Kawar and Kiersnowski pick out an accompanying melody with precision. The record is so consonant and well-put together that I figure it has to be largely composed; if I found out this was completely improvised my head would explode. The dexterous trio still certainly allows for improvised touches, such as in "Curly's Notebook", but to be honest it's actually pretty refreshing to hear someone take the jazz vernacular and move in a slightly different direction, creating something incredibly beautiful without sacrificing any compositional complexity whatsoever. There definitely seems to be an emotional component to Rats' music but it's never sentimental. They are certainly unafraid to throw in a jarring note so when they deliver a sweetly melodic line it's almost breathtaking. Plus, they tend to drop a gem and simply move on to another, rarely repeating themselves.
"Raunchy Fax" flirts with raucousness with a phenomenal, frantic little heat-up before slipping into an elegant, yearning melody and then jettisoning back into the clattering guitar and sax bleats of the first half of the track. I mentioned that Rats rarely repeat themselves, well they indulge me in what is absolutely the most gorgeous, untouchable piece on an album of winners. I'm counting the days before some smart director selects "It's Lonely at the Top" to score the pivotal scene in his or her film. It doesn't matter what the scene is, whether actors can act or if the cinematography is shit; this song is so powerful and heartbreaking, it will choke you up. Lead by a perfect, lilting saxophone melody, the guitarists provide subtle backing before slowly unfurling some lovely lead lines of their own the saxophone gently hums. Unspeakably magical. "Sentimentally Titled" is jauntier thanks to the "rhythm section" of Kawar and Kiersnowski but its another melodically rich piece that evolves persistently throughout its two minutes and eighteen seconds. "Bee Charming" mostly plays it cool with flashes of urgent sax pushing their way in. "Squirrels Gone Wild" features an especially complex web of notes as each instrument weaves in and out of each other adding a bright, bubbly melody to finish it off.
I like the first 2:15 of "Pumping Irony" fine but man, the melody that comes at the last minute and a half is some of Rats' best work on the record. It's a fleeting 20 seconds and I am perpetually hitting the rewind button but it also marks a wonderful shift in the piece.
"Wasabi Break," at six minutes, is the longest cut on the record (most fit snugly between 2 to 4 minutes.) Rats use the extra time for an extended breakdown which sees an ascending melody dissipate into a ruminating string (can't tell whether it's coming from the bass or guitar) that comes off a bit like a vibraphone. It's an interesting moment in the record, hearing only that string vibrate in solitude for a second before the rest of the band slowly crawls back in. "Ghost Gang" is another quick one that comes right to the point, juxtaposing an initial pleasant melody with a loose, skonk-lite section with things getting even stranger from there as the band tries to marry the two approaches. "Teriyaki Milkshake" is the finale and it's a good one. I hear Ornette Coleman and his slippery, elliptical but melodic style of play in the first half but Rats morph the piece into another one of their signature mournful, melodically rich passages. It's a perfect way to end a beautiful record.
Rats is an immensely enjoyable listen and a pretty damn fine record overall. The pro-pressed CD is self-released as far as I can tell so hit up the band's website for a copy. Recommended.
Posted by Auxiliary Out at 9:20 PM No comments: