In Brief #1: Allow Me to Reintroduce Myself

I'm starting a new thing here on AuxOut where I'll write "brief-er" reviews of a group of releases. This is basically coming out of necessity due to (free) time constraints. There's so much great music on my shelf waiting to be reviewed and it seems silly to not write about it just because I don't have the time to write pages about it. I have a hard time keeping reviews short (as any faithful reader knows) but perhaps outside circumstances will provide some motivation in that area.
Something being included here doesn't mean I view it differently than something that I write a regular ol' long-ass review about. I may end up writing about shorter releases here because they ostensibly don't provide as much "material" to review, I may end up reviewing all the c90s I get here because I definitely don't have time to do a minute by minute breakdown of one of those beasts and a shorter "here's the jist"-style review may work better, I may end up doing "themed" groupings, I may end up writing about things that I got forever ago and for one reason or another never finished a review. I'm not making rules (nor promises) so I really don't know.
I don't know how often I'll write these things either. Could be in waves, could be quarterly--once again I'm making no rules.
Now that we've gotten that out of the way, I have some fine releases to espouse upon:

Bret Schneider - Model of a Garden Scene With Watering Can [Avant Archive]
Totally balls out computer music tape from Milwaukee's Avant Archive label. I admit I can be a little apprehensive when I hear that something's made on a computer, lots of great music has been made with computers, sure, but enough of the time computer-made music ends up sounding flat and soulless causing me to be wary. That is not the case with Bret Schneider's tape Model of a Garden Scene With Watering Can; this shit is fucking bonkers. Bustling through 11 tracks in almost an hour this thing is filled to the brim with stereo-panning madness, swooshes, beeps, pricks, bonks, hums, whirs, squelches, bumps, thumps, scrapes, clangs and crackles--I know I'm forgetting a least a few more.
Schneider's tenacity with his 1's and 0's is akin to the worlds of blustering percussive, electric and breath-fueled free improvisation as well as modular synthesizer brain splatter, as well as, the more "out" noise and tape-mulch crews. As a matter of fact, this is the kind of synthetic madness I could see coming from the local Gift Tapes/DRAFT Records axis.
Totally and continually unpredictable; once again, allow me to stress that this shit IS FUCKING BONKERS!
This is one of my favorite tapes yet from Avant Archive and it's still readily available so check the mofo out

Bad Trip - Beat is Murder [House of Alchemy]
I love it when House of Alchemy dips into the avant-free-improv realms. This Beat is Murder cassette, along with a sweet solo-percussion tape by Chris Dadge (which I will finally get reviewed one of these days,) are probably my favorites I've heard from the label. (That Amber Lions 3" from forever ago is pretty sweet too.) Bad Trip is the duo of Pascal Nichols (Part Wild Horses Mane on Both Sides) and Julien Dupont (who may or may not be this guy.)
The first track "Sharpennec" is still my favorite. No instruments are listed but it sounds to me like percussion and oboe (or perhaps more likely clarinet.) There's also a degree of electronic and/or tape manipulation of the instruments as well. More dance than a duel. The two instruments have a ball wiggin' out with each other in an unusually groovy slab of musical freedom. The two instruments also tangle in echoey amplification, more minimally and in extended fashion, on "Xuaett." Is that a violin and guitar I hear as well?
Other tracks feature various configuration of percussion, reeds, whistle/recorder and guitar. Bad Trip mostly explores dank textures rather than the free-jazz-inspired rave-ups/blow-outs you might expect from a percussion/reed duo. They develop a moist atmosphere without relinquishing the loose live-jam feel, a difficult feat.
My girlfriend even said this is a "cool tape!" Nab it if you can find it.
Sold out naturally but you can still grab that Dadge tape at House of Alchemy. Hit the distros if yr in search of a Bad Trip. Sweet art by Faye Coral Johnson too. 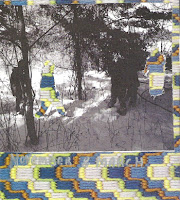 Napoleon Blownaparte - November and March [Green Tape]
Another crew (sounds like a duo to me) peddling lo-fi junk-prov is Napoleon Blownaparte, who I hadn't heard until this disc. Transmitted by the reliably mysterious entity of Green Tape. The Blownapartes seem to have everything but the kitchen sink at their disposal--scratch that, the kitchen sink too. Primitive percussion rhythms are often the feature but there's wobbly guitar, asthmatic reeds, organ/keyboard/electronics/something-that's-plugged-into-the-wall that all make appearances. The packaging has practically no info but the artist and title (and that it was recorded in '06 and '07) so I'm just spitballing here. Unlike a lot of these processions Napoleon is relentlessly mellow. No ear-burning bleats and crashes, actually the sounds aren't even that "free." There's pretty much always a melodic and/or rhymthic base in each track from which the players deviate and carve their own paths for expedient travel. If a beat seems to be getting too militant they stop the tape and start anew. The sixth track wiggles to an infectious little melody from a keyboard (or possibly a whistle of some kind)--hit single, these boys are going places. Ditto on the grooving wheeze of the eighth track.
A little amorphous as a whole but it's a fun listen for those of us into junk-grooves.
The CD-r is still available from the source

Dementia and Hope Trails - Ethereal Hurt [Dynamo! Sound]
Dementia and Hope Trails is Justin Marc Lloyd (Pregnant Spore, et. al.; the Rainbow Bridge label) doin' his thing on guitar. The most prolific and noisiest dudes gotta drop a pretty 20-minute tape of guitar glistening once in a while or risk losing their cred and, this sir or madam, is Lloyd's.
Ethereal Hurt is as much an apt description as it is an album title. The cassette gives off gently melancholy, head-in-the-cloud vibes sounding probably a lot more like a neo-new age synth tape than most solo-guitar tapes. The texture is ultra-lush, not a trace of a string being hit the entire 20 minutes. I know the six-string is probably heavily processed (this is a noise dude we're talking about here) but Lloyd has to be pulling some major e-bow shenigans because the smoothness of the tones is pretty unreal. The second side has a slight edge but really sounds no more like a guitar than its preceding side. If Lloyd had cranked it up to 11 he'd have had some Hototogisu (am I the only one who misses those guys?) scorched-earth guitar-led manslaughter/euphoria on his hands. Nice.
Hit up Dynamo! Sound Collective for a copy

Talk West - To Hope is to Hanker [Avant Archive]
It seems as good a way as any to bookend this post with another tape from Avant Archive.
Talk West is Dylan Golden Aycock and his weapon of choice is pedal steel guitar. This particular tape, To Hope is to Hanker, was apparently recorded in an abandoned warehouse--where are all these "abandoned" warehouses and factories that everyone gets to record in? I've never seen one! (ignore my jealousy.)
There's not a whole lot of pedal steel players out there so it's always fun to get one on tape. Aycock builds his compositions based on loops of pedal steel; although his compositions range from the shimmer of "Boxcar Billow" to the agitated signal manipulation of "Unseen Weights." "Grace the Humble Stumble" is the strongest piece on the first side as Aycock creates cascading pedal steel phrases and layers them into a lilting, cyclical piece.
However, the second side is really where it's at. "Buddha TV" is pretty beautiful, providing an array of chiming clusters of notes. "Soften" is a little looser in concept, Aycock allows it to stretch its limbs a bit. Aycock comes up with a wider spectrum of sounds to work with than some of the previous tracks, intermingling recognizable "pedal steel" tones with some that are perhaps a little less recognizable. He treats you to all these disparate strands, coexisting but not quite connecting, and then, boom, all of a sudden, things coalesce and make total sense. Really, really great track, certainly the finest of the album. "Holed Honey Shade Tree" is a perfect closer, a simple, elegant piece of mild melancholia.
There's a lot to like here and the tape looks excellent as is always the case with AA.
You can grab this from Avant Archive
Posted by Auxiliary Out at 10:37 PM