Adderall Canyonly - It was a Dark and Stoney Night [Field Hymns] 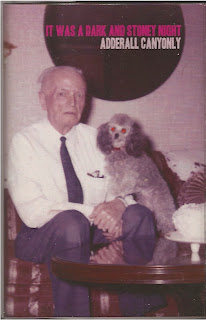 Is it a stretch to call Adderall Canyonly a successful pun on Cannonball Adderly? Probably. But I admire the ambition.
This (predominantly) analog synth tape is not new-agey or kosmiche; it's not a modular experiment. Canyonly's music is strongly rooted in popular forms: hip hop, pop music, modern movie soundtracks; but cannot be pegged as a particular one at any given point.
"March of the Lemmings, Right Out of the Documentary" bursts forth with a pumping drum machine and wiggy filtered synth lines. Electric guitar provides a little moral support halfway through, making it sound quite a lot like a home-made Summer blockbuster soundtrack. "Retardtenders, Rectumheads" is a little spooky like Gravediggaz or Kool Keith in creep-out mode. A fat synth groove throbs against faux-theremin and chilling organ chords. The last minute rules especially hard! The first part of "Kerpoodle" sounds exactly like a beat I made in high school--kind of freaks me out. This is lightyears ahead of what I came up with though.
"Magnum P.U." is a highlight and, in short, it's Sonic the Hedgehog in the Mediterranean. Straight up legit Sega Genesis genre music here. "667" works as a good counterpart continuing a similar feel but with a much more chilled out vibe. It's like the soundtrack to the following "night level" with some surprisingly heavy guitar crunch at the end.
"Driving Parker Posey to the Mall" is fucking perfect. It's absolutely infectious. It seems to encapsulate bits and pieces of lots of songs without sounding like any. I definitely hear a little "Girls Just Want to Have Fun" at 1:35 or so but I wouldn't actually compare the songs whatsoever. Canyonly really brings out the goods in the final 90 seconds with a positively lovely shimmering synth bridge. If you've been longing to post a 80s teen movie tribute video on Youtube but haven't found the right song, here you go.
"Hipster Cred" sounds like Timmy Taylor lived through the car crash and Brainiac were born during the dance-punk explosion of the early 00s, with 4-on-the-floor hi-hat bluster and all. Based on some the ghastly puns present in half the titles I'm not so sure Canyonly isn't shouting "Hipstercrite! Hipstercrite!" in the chorus. The lyrics are pretty hilarious: "We read the Pitchfork/Why don't you like our band?" A Six Finger Satellite-style synth-punk freakout was totally unexpected but I sure do love it.
The tape has a very nostalgic feel but not in the literal/referential/ironic way that James Ferraro and his cronies have made popular. This tape is full of things that seem familiar but you can't quite put your finger on. Or in the instances in which you can, you realize there's only a memory or tangential link connecting the two. The connections made might say more about the listener than the tape itself.
For instance, "Krautaquatsi" feels 1990s to me. It isn't on its face; it's not a throwback--and obviously the dates of the references punned in the title predate that period--but there's just something in the melody and atmosphere of the track that takes me back there. Perhaps someone who grew up in a different decade would have an alternate take.
Once it gets moving, "Ponytailed Apes" grooves like nobody's business. There's a bit of minimal techno influence to me but that doesn't stop Canyonly from delivering a big, florid synth wash in the second half. "Now Underwormen"almost goes into music concrete territory with overdubbed guitar improvisations mingling with spurts of static and overlapping speech samples of a hypnosis instructor or something. Another curveball on an album with more than a few. The first minute of "Ty as Wrung from Burns the Cry" is a pretty three-note organ melody that eventually unfolds into a echoing drum track and a lonesome synth-clav solo ending the tape on a somber but tender note. It's actually a rather gorgeous piece.
This is a cool tape, it drives you all over the map in 40 minutes. Definitely worth checking out for anyone interested in playful electronic music. This is still in print, hit up Field Hymns for a copy.
Posted by Auxiliary Out at 6:42 PM