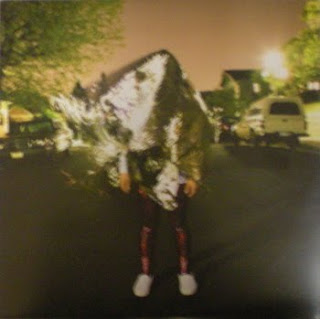 A couple weeks ago I mentioned I had some more electronic/dance stuff on the way and, well, I'm making good on that promise. The press release for this, the recent purple LP by El Salvador/L.A.-based artist Sister Mantos drops names like Donna Summer, Giorgio Moroder, Suicide and Gary Numan and I'm not sure how accurate those claims are, nevertheless, it's a pretty good dance record.
Beginning with a mellow jam like "Like I Want 2" is an interesting move. Makes sense though as its possibly the most memorable track on the record. It has a really nice simple pulse that's slowly built up with atmospheric trumpet, keys and other sounds. The buoyant beat keeps the track bump bump bumping while everything else, vocals included, sounds nonchalant and nicely washed out. There's a nice droney outro too. "Disaster Beat WE ARE ONE" is a less shy tune. Its beat actually reminds me a bit of that hair_loss LP I just reviewed though employed in a little different context here. The track is full of propulsive rhythms, irreverent synth lines and choral-like backing which have a priceless effect especially during the excellent breakdown. It's got a lovely melodic lilt which isn't too common in dance music, in my experience anyway. Sister Mantos employed a number live instruments and you can tell. He seems to pay a lot more attention to the texture of his songs than your average laptopper usually does. "AUG05" really reminds me of another song but I can't place it. Built around a jagged, juddering beat, everything else is a placid as can be. Lonesome, blurry vocals and airy waves of synth; it's practically a drone song. "ASTAROTH" flirts with a web of samples and loops before going double time into a neo-disco stomp and then back again. Here is one of the finest moments of the record where a beautiful keyboard part rears its head and gently rolls along against nearly imperceptible vocals til the end of the side. Lovely.
"Kaos" the first track off the second side, has almost a Timbaland-at-a-rave vibe. At least at first, the piece becomes progressively less minimal as it goes on. The song more or less acts like an intro into "No God," probably the first anti-theist dancefloor track I've come across. There's a nice guitar solo that breaks things up but the track lacks the atmosphere a lot of the other songs on the album bring so the repetition doesn't hold up as well and things get a little monotonous by the end. "Stopped Trying" checks the beat at the door, for a misty multi-tracked vocal and synth song. It's very simple but effective and an unexpected choice for a dance record. It really pays off though. "WORLDWIDE" brings the record back into the club. The track is anchored by an excellent chugging violin melody, which provides a different but very welcome timbre to the proceedings. There's plenty of other great things going on here too, lots of excellent synth melodies, strange unplaceable percussive noises and so on. "Breakdown the electoral college" is also a pretty unexpected refrain for a dance anthem as well. "Messian's Dream" is a short outro of cave sounds and that wraps the record up.
Electronic music isn't my forte really but I like this record, Sister Mantos knows how to write and execute pretty complex arrangements and most of all he achieves a sound that doesn't come off as too plastic or digital. It comes on cool opaque purple vinyl which is a definite plus as well. Still available.
Posted by Auxiliary Out at 7:20 AM

Cool! You can buy the vinyl now at the Sweetheart Society Store
Or download tracks via itunes :)