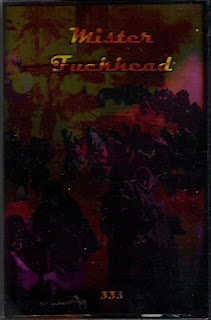 A while back I reviewed a hulking 93 minute beast by Mister Fuckhead and Company, where Arvo Zylo and a series of collaborators ran the gamut from forming live junk noise brigades to 7 or 8 piece meat locker brass sections. Zylo a.k.a. Fuckhead (though he recently dropped the moniker and now plays as just Arvo Zylo) is back but this time solo, apparently with only a sequencer in tow, with 333, with a cassette seven years in the making.
Zylo is up to something very different here, it's still a beast at 3 tracks spread over a c66 but Zylo throws plenty of curveballs. For instance, the first side, "Quicksand Eggs of a Beaten Pathos" rolls to a start with surprisingly mellow looped toms. If he wanted to head in a powwow direction he could have, but instead he launches this queasy synth beat and furthermore throws barroom piano over that! The beat lurches/grinds/limps along in a bizarre mess of a beat. Flaming barrages of noise drop in and things get harsh. Heavy torrents of feedback all but subsume voice and the deep throb of the drum programming. The tape continues to singe your eyebrows for a long while with screaming frequencies. It drifts out of the cloud enough for some heavy piano and drum hits though. Sequenced synth tones spread like an infection and morph into an electric organ bit. There's some thunderous crushing drum hits quickly after before slowing into a mid-tempo beat with oscillators puttering all around. The beat gets syncopated and lurches forward. Zylo breaks it down mixing up the beat with a programmed drum solo constructed from live drum samples I think. Around halfway through, the carnage seems to cease. A quiet drum pounds slowly in an empty room until corroded by pervasive scratchy static, atonal panned piano slams, hyperactive squelches and what sounds like a cut-up keyboard demo that morphs into a weird house rave-up. A new agey synth makes a surprising but welcome appearance as the piece jettisons deeper into its technicolor nightmare. My favorite beat from the side emerges pretty late in the game and it's fleeting too as it gets slowed down pretty quickly. The tape lurches and grooves relatively "un-noisily" for the rest of the jam until it evaporates in a cymbal crash. It's a dense and burly side to be sure.
Following it is the first track on the second side, "Deadbeat Deluxe," which continues the onslaught of noisy beats. All manners of bzzsh's, krshff's, and mhmffm's make their way along plenty of loopy electronics into a cyberpunk thrill ride. Fast drum machines, heavy reverbed thumps, repetitive synth parts; no one would mistake this as being uncomposed but it still hangs together by a thread. Zylo keeps piling on more and more sounds/parts/whatever until it makes up a cacophonous layer cake of destruction. The track achieves an interesting feat in that it's totally assaulting music without actually relinquishing the conventional rules of what music should be. The piece breaks down into a section of rare sparseness and Zylo marches along with a beat that sounds like a whip being cracked along with an array of strange noises. The beats kick back in with a bit of a vintage video game vibe. The soundtrack of Mario getting his ass tortured to death in Bowser's dungeon? Don't know what the inspiration was here, but I suppose that's as good a guess as any. The frequencies continue to heave, the jam gets progressively noisier and more confrontational. The steam engine continues to roll until its yanked out by the neck and replaced by a new beat that quickly peters out. The final and shortest track "Plasma/Asthma" is by far the noisiest jam, and I mean that literally cause of how saturated, blown out and grainy it sounds. The sound doesn't lose any definition because of it though which is amazing. Kudos to the masterer, Clayton Counts. Underneath the six feet of fuzz are pounding percussive loops like a muck raking hip hopera from hell about a factory workers' uprising. Gears grind, seize, stop and lurch forward again in bizarre poly(a)rhythms. Shifting into a machine gun synth melody, things get progressively zanier. In what, in all likelihood, is my favorite part of the tape, Zylo launches into a heady haunted organ jam. It's excellently composed with various layers of melodies and manages an absolutely seamless transition from all the head smashing that came before. The whole tone of the piece is difficult to describe as it manages to be a little uplifting but in a very unsettling way. It's perplexing, but I'm gonna take the sublime whenever I can get it.
This is a hefty hour of music, and not everyone will be down with it, but whether someone is or not shouldn't cause the listener to hold back any respect for Zylo's painstakingly put together and singular vision. Fuckhead and Company will probably end up getting more plays in my deck, but 333 takes you on a journey that the former can't match.
The packaging is cool as is typical with Zylo's releases, 333 has a purple vellum cover with a double-sided, fold-out color j-card on the inside. The tape is still available from the artist and there is also a pro-duplicated, shrinkwrapped CD-r edition too if that's your preference.
Posted by Auxiliary Out at 7:54 AM