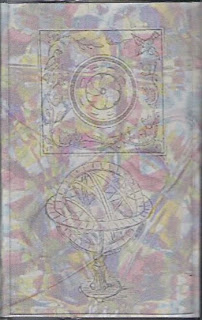 This was my first taste of Canadian label House of Sun and these two tapes certainly left me hungering for more.
I feel like I've seen the Tuluum Shimmering name around but this is my first time ever hearing their sounds and I'm impressed. The first side opens up like a portal into some peaceful dreamworld. There's a few melodies continually cycling through and plenty of soft, ethereal sonic padding. Every so often there's something that sounds like an alien bird call or something so you really feel like you're listening into some other world. Fuck Avatar, this shit seriously transports you into another universe. The track keeps evolving adding more complex melodies, further forming the delicate but buoyant rhythmic pattern. It's pure analog euphoria. The second side is maybe even better. It dials down the sonic haze a bit and ups the rhythmic edge. It reminds me a little of Spencer Clark's best Black Joker stuff. Very abstract and fragmented but unwittingly catchy and insanely listenable. I'm not exactly sure what all is at Tuluum Shimmering's disposal here but there's definitely some kind of wooden flute used prominently, a hand drum of sorts, and a bit of jangly percussion. The thing though is it doesn't really come off as being one of those primitivist revival things; its composition is much too streamlined. The piece gets more and more frantic as it skips along making for a fittingly wild finale to a strange journey and killer jam. One of my most listened to tapes as of late, definitely recommended. 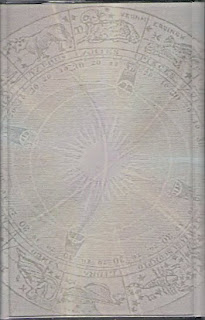 This Charlatan tape is pretty damn great as well. I'd never heard of this project before so I'm really glad this tape found its way into my possession. This is really heady synth stuff of the new agey variety that people have been getting back into over the last couple years and Charlatan is definitely one of the best artists I've heard currently working in that mode. Starting off on its strongest foot, "Titans" is lush and gorgeous. A mountainous example of synthetic beauty, it flows effortlessly, totally enveloping and cradling your mind. It's elegant or elegiac or whatever you want to call it, but for 9 minutes it makes the world seem at peace which is a pretty incredible thing. "Pyramids" fills outs the first side with more gentle keyboard vibes. It marks a change from "Titans" as it focuses unabashedly on melody as opposed to atmosphere; it's great as well. The first of the second side's trio of jams is "From Dust" and it fits somewhere between the previous tracks. Various airy layers enshroud a burbling melody and pitch manipulation making the proceedings extra outer spaced. Another standout, "Delta" is a heavy floater with gloriously broad strokes of synth and the shortest piece "Seed & Light" closes the tape with uplifting, trebly keyboard notes.
The big bummer is both tapes were limited to 40 copies and are out of print. Though I obviously suggest you nab both of them if the opportunity arises. They're perfect soundtracks to your analog dreams. I'm definitely gonna be tuned into these artists and label from now on.
Posted by Auxiliary Out at 1:04 PM