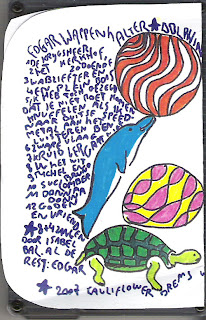 The Bread & Animals label has been one of my favorites for some time, both for the ‘out there’ but consistently awesome jams and its KILLER aesthetic, both in packaging and attitude. Anyhow, these are a couple tapes from the B&A teepee that I’ve been loving for awhile now and my praise is long overdue. Better late than never, right?
It took me what feels like forever to track down this Dolphins of East Belgium/Edgar Wappenhalter tape. I’d finally given up thinking the tape was long gone when I spotted a copy in the Release the Bats distro. When I finally got it I was not disappointed. Starting with the Edgar side, the guy runs through 12 tracks in what I’d estimate to be twentysomething minutes. I’ll be damned if I can read the scrawled tracklist so I'm just gonna act like the songs have no names. After a short intro piece, the second track is an instant stand out. The track is pretty simple but ragafried; a couple tracks of guitar (and a sitar-like sound that may just be guitar) and excellent hand drum accompaniment. It sounds a tad like some GHQ stuff but less brooding and more percussion oriented. It’s a real lo-fi zoner. Things get weirder with a brief interlude of moaning, intertwined vocal loops. A few rather beautiful tracks follow; the first is short and sung by a female with a somewhat traditional folk vibe. The other features vocals so ghostly, I second guess whether I’m hearing them at all. It’s reminiscent of Grouper’s LP from earlier this year and is much too short. Elsewhere on the tape are more guitar based instrumentals, sometimes strummed sometimes plucked and one track features those shrill, squirrelly sounds you get when you play with a slide right over the pick ups. The eighth track (I think) sees a return of female vocals as well as percussion. For some reason it reminds me of a medieval folk song or procession, though I can’t figure out why. The piece is not in medieval style or anything like that but it sounds like a wonderful, lost relic. The ninth track is another favorite, with gorgeous melodic interplay between two guitars and wordless vocals. After another guitar rumination, Edgar (I assume) takes the mic for two plaintive acoustic ballads, the first being very rough and rudimentary though affecting while the second is more refined and features a keyboard of some sort providing counter melody. Though I’d never heard of Edgar Wappenhalter before, he is supposedly part of the outstanding Silvester Anfang funeral folk crew, so the greatness of his work here isn’t much of a surprise.
Dolphins of East Belgium is some form of Lieven Martens’ Dolphins into the Future/In the Eye of Vision project which appears to be on the verge of blowing up with a bunch of releases on the way including one on the coveted New Age Cassettes label and a European mini-tour in a month. I’m not sure if there’s any difference between the projects but this tape is Lieven and someone named Wietske Van Gils (who I read somewhere is his girlfriend). Anywayyy, onto the music. The Dolphins side is totally rad; peculiar, hypnotic transmissions composed of looped keyboard, spirit flute and plenty of reverb. Their myspace page claims “THESE ARE NOT SOUNDS CREATED BY OURSELVES. THESE ARE SIMPLY A TRANSCRIPTION OF THE KNOWLEDGE AND WISDOM ABOUT THE PAST AND FUTURE OF EARTH. WE RECIEVE THIS CONTENT THROUGH EMOTIONAL-EMPHATIC CONTACT WITH DOLPHINS. THESE ARE HOLOGRAMS OF BEAUTY AND POSITIVISM.” And you know what? These “holograms” are just dreamy and extraordinary enough for me to believe them. The second piece on here is my favorite it’s a mesmerizing, repetitious, shimmering deep sea keyboard that if I had my way, I’d listen to this baby for days. It is entirely soothing and pure and just… it’s just fucking brilliant! After that (unfortunately) ends, a new piece begins featuring echoing, wandering thumb piano sounds and a low muffled hum akin to a wind’s howl or waves crashing on the beach crossed with an alien spacecraft. It also has a soothing effect though in a different way; there is a lot more open space in the track. A synth, sounding like a slot machine that has permanently hit the jackpot, dominates the next short piece. A mellow J.D. Emmanuel-esque piece follows, its melodic overall but there is a slightly menacing undercurrent. I have no idea how they were able to achieve that effect with their placid palette, but they did anyway and I like it. There is an incredibly brief aquatic outro that I wish had been stretched out about seventy five times longer, and that’s the end of the tape. Both sides are great and cover a broad range of ideas each with relatively limited palettes. I particularly dig the Dolphin’s transmissions but that’s no slag on Edgar’s side. My only bone to pick is a small one—the tape is on a c-90 although there’s probably 40ish minutes of material so it’s kind of annoying to have to fast forward forever after the end of each side to hear the flip. 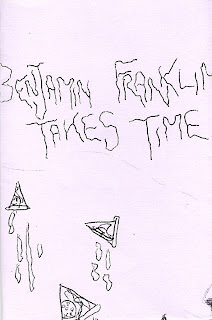 Next on the list is Takes Time by Benjamin Franklin (who plays in Buffle and R.O.T.) which was one of my favorites to jam in my van over the summer. The tape is one-sided, but there’s still almost thirty minutes of material so I’ll let it slide. The first two pieces “Histori” and “Objecti” are two minute guitar-based pieces. The former is clean toned but rather skronky, Mr. Franklin does a good job imbuing the piece with melodic sensibilities despite its fractured nature. “Objecti” (which appeared on last years Graag Trag Sloow Tape) is an a bit more straightforward strum and jangle affair with a banshee slide guitar bit at the end. It’s much too short. The final two tracks are the real gems here though. “Vlige” (also appeared on Graag Trag) sees a steady echoing guitar joined by totally lush synth cheese. A great job is done creating a nice ambient atmosphere without drenching the whole thing in effects. A beautiful piece and that synth just sounds amazing. The final piece is a live recording titled “17 Min” and I’m sure you can guess why. The track commences rather spaciously with a wandering guitar. Ethereal keyboards join. Until a bit of high-pitched sustained guitar or synth take over. A pretty arpeggio emerges in the hi-end sunbeam until an effected drum machine starts up. The drum machine goes it alone for a little bit until the keyboard comes back the whole jam turns into an urgent space march. Awesome. That section fades and a flighty keyboard bit goes for a little while and Benjamin ends with mellow rumbling akin to the a processed crackling of an endgroove, receiving extended standing ovation-type applause. A really cool tape overall.
Each tape’s packaging must be mentioned as well. The Edgar/Dolphins tape came with two inserts (one with killer drawings of a turtle, a monkey, and dolphins all playing with beachball-type orbs) and the whole thing was wrapped in a piece of fabric and tied with a pipecleaner. The Benjamin Franklin tape comes in a plastic bag, also with two fold out inserts. The cover opens up into a full page with info, drawings of a bear, paper airplanes and lots of dripping pizza. There’s a cool ‘killer whale’ stamp too. The second insert is smaller and features pictures of Benjamin’s crashed car on one side and cute little tiger cubs on the other.
There is no label out there like Bread & Animals, and both these tapes are textbook examples of its eternal coolness. Both these are sold out but if you find them elsewhere I recommend picking them up, I hope to hear more from all these projects in the future. Also keep your eyes and ears locked on B&A, cause they are looking to make the next year worth living with audio and video cassettes by The Eye of Vision, a Tomutonttu 7”, tapes by Orphan Fairytale, Gas Shepherds, Fricara Pacchu, Maths Balance Volumes, Auk Theater, J.D. Emmanuel, etc. LPs by Watersports and IDM THEFT ABLE, a Uton book+3xCD and on and on and on and on. So get yr minds ready.
Posted by Auxiliary Out at 5:15 PM

Most definitely. Bread and Animals is one my favorite labels out there. Got some more killer cassettes by Lieven that I'll review soonish. Thanks for reading.

Lieven's got a really unique world view and great taste!