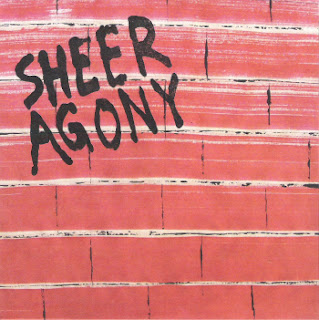 Received a pair of pretty stellar 7inches from Montreal's Fixture Records, the day before our nation's birthday--incidentally my birthday--and I've listened countless times since. It's always a treat to get a couple 7inches in the mail, particularly when they're as good as these guys.
With a name and a cover like that I don't blame you for thinking Sheer Agony is a hardcore band, the truth is though, they act tougher than they really are.
Delivering four songs in nine minutes, this is a damn fine pop record through and through. The touchstones for each song are easy to pinpoint; yet Sheer Agony subvert their reference points just enough to sound like themselves and not their predecessors.
I'm pretty confident that if the average listener heard "Pet Crow" on the radio, he or she would think it was The Shins. The bouncy bassline and acoustic guitar jangle, even a bit of shaker action, and guitarist/vocalist Jackson MacIntosh's uncanny resemblance to James Mercer's voice on the track. And while it often sounds like the best of The Shins' material, Sheer Agony throw a wrench in the machine at the bridge. The unnerving breakdown at the end of every verse and chorus undermines the sunshine incarnate of the rest of the track. Then they break into a really nice, proper bridge of minor key guitar psychedelia. One of the best things about this record is it's packed with great melodies without actually drawing attention to the fact that it's packed with great melodies.
While hints of (early) Of Montreal's modern psych-pop shenanigans are present in "Pet Crow" they become more clear in "She's an Artist." The vibrato-laden guitar leads the charge with some pretty wild psychedelic bubblegum backing vocals making an appearance at the chorus. The vibe I'm getting is a bit of a 90s college rock feel applied to the bedroom psych palette--or maybe it's the opposite. Either way, the rhythm section thumps to a close, while MacIntosh multi-tracks a tangle of equally catchy guitar lines before the endgroove.
My favorite track shows up on the second side: "Good Cats Go to Heaven" a Ramones-aping power pop number a la Nobunny and other like minded folks. Straight-up ear crack. I can't figure out what the song's about, animals figure in as you'd imagine but so does "Szechuan" (?) Szechuan what, I cannot say. True to form, the band flips the script with an awesome bombastic bridge that must have been yanked from abandoned space rock tune they were working on.
The closer "Claptrap" sounds like a compressed Television tune i.e. no guitar solos. Angular guitar cuts, bass-provided melodic flourishes, snare rim rattle, jangling arpeggios, a little subtle guitar feedback are all present elements making for a solid track, though probably the least spectacular of the four.

The fact the band recorded this record themselves and mixed it (along with Peter Woodford) is pretty crazy to me because this thing sounds perfect. There's so much going on at any given moment and it all sounds clear as day while maintaining that unmistakable home-recorded vibe. Really a hell of a job. 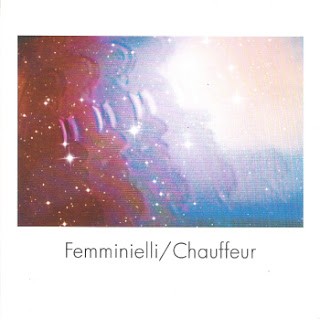 Now when I used the word "stellar" in the intro I really meant it talking about this spaced-out faux-split 7inch. I'm still not totally clear on the difference between Femminielli and Araignee, maybe the confusion is supposed to add to the trippy effect. Both are projects of Bernardino Femminielli, both make their bread on synths and drum machines, and both indulge in galactic vibes.
There are a lot of words one could use to describe this record: lush, cosmic, hypnotic etc. But none of those will give you a complete picture of what it sounds like.
The Femminielli side contains the track "Chauffeur" and it's simple but potent. It's more or less a power ballad when you get down to it, built upon the ever-reliable chug of a drum machine, ethereal synth chords and a spine-tingling synth-melody reminiscent of Halloween that establishes itself a 1/3 of the way in. Add in Femminielli's whispery, non-English vocals and the whole thing has a vibe of an unearthed European private press single from the early 80s. Not only does Femminielli limit the amount of elements in his track, after he's finished introducing them within the first minute, they stay constant. The track works like a piece of mood music, sustaining a single atmosphere over its duration. What that mood is is a little trickier to pin down. A bed of synths, a repetitive drum track, this stuff is trance-inducing but not necessarily in the euphoric sense; there's an underlying tone of creepiness like someone might have spiked your drink. This sounds like being up at 3:00am in unfamiliar surroundings. Seriously perplexing for what's ultimately a pop song at its core.
On the second side is where Araignee's track "Silvia" resides. This track has a similar sound to the previous side if a little more spacious. Where it departs, is the overall vibe which is rather romantic actually. This sounds kinda like Air but with the underground's obsession with vintage synth-ephemera. There's a pretty little keyboard solo and everything. Femminielli's arrangement is more varied here, moving between the minimal verses and the lustrous veneer of the chorus while peppering a few flourishes throughout the track. However, despite the lovey dovey stuff in the preceding minutes, the unsettling climax lets you know that Araignee resides in the world of Femminielli and not the other way around.
Both of these have been getting a lot of airplay here at the AuxOut HQ since their arrival, with Sheer Agony getting the edge. That could be because the sun is out here in Seattle for the first time since, I don't know, last September. It comes down to Sheer Agony's nervous energy versus Femminielli's and Araignee's sedation and depends on if I'm in the mood for uppers or downers. In either case, I'm in good hands.
Visit Fixture for copies.
Posted by Auxiliary Out at 9:21 PM