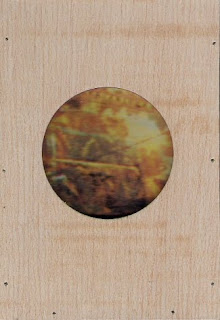 Armed with perhaps the most unwieldy band name I've ever encountered, Portuguese psych unit dUAsSEMIcOLCHEIASiNVERTIDAS (which I gather from minutes of internet research translates roughly to "tWOHALFiNVERTEDeIGHTHNOTES") drop a burner of a c30 housed in a plywood box thanks to enterprising labelhead Carlos Costa of brand new imprint A Giant Fern.
The first jam, "Amnesia," teases a little bit with scattered notes here and there and no real form. You can sense something is coming though. Fragments of riffs are leaked out, a rhythm section slowly take shape amidst oscillations. Then all of a sudden, it smacks you in the face, the moment you've been waiting for. A killlller 3-note bass riff hits real smooth. Now that I'm expecting the band to blow the jam wide open they opt to end it (what's the deal?) I might be a little miffed but they get back to it on "Anagrama" which sounds much cleaner with another relentess 3-note riff tripled on bass, organ and guitar. A saxophone wails away as the rest of the band veers back and forth between mellow vibes and aggressive buzzsaw modifications to the main riff. If The Jesus Lizard was a psych band, you'd probably get something like this. Sweet. Finishing out the side with much chiller vibes is "Apneia." Bouncing from "Anagrama" to this track is like seeing these guys play at a basement punk show and then at some mellow late-night club. Previous track gets you up on your feet and this gently pushes you back into your seat.
The album's default epic, "13:13," on the second side, is pretty sparse and definitely free at first. Each member drops their own strange sounds. So suddenly that it almost seems like an accident, all the stars align and the band is grooving as one. Ever so slowly they build to a cascading peak before exploding into this weird disco/jazz/psych hybrid. That's one of the most striking qualities of the band, that they bring so many different influences in comfortably under the psych umbrella. Noisy art-rock, disco/funk, improv, a little dub, a touch of hip hop and a hefty dose of jazz. These guys sound like they love playing; even in the moments where they're "cooling off" you can feel the adrenaline still pulsing through them and the sweat pouring from their collective brow. "13:13" is like an unkillable beast, it may back off temporarily but that's only because it's prepping to come back at you even more fiercely. By the end of the jam, the band is so turned around they finish the tape with "Intro" which is just like it sounds. Heavy chiming, gentle guitar and synth mangling, you get the idea.
The tape is a lot of fun. It plays more like a collection of various jams than an album, but that's pretty characteristic of the psych-jammin' genre in my experience. The band has a lot of raw energy, a sense of adventure and a weird-ass name (at least to those not from the Mediterranean) how can they lose?
Getting back to the coolest thing about this release, the tape comes housed in a plywood box, cut and nailed together in a super-professional manner. There's a perfect circle cut in the front to let your choice of two picture cards show through and then on the back "AGF1" is etched mechanically on the back in big capital letters. Amazing little package! The label's called "A Giant Fern" how can it not rule as well??
The Fern edition, that is the plywood box version, is limited to 45 but there's also the fantastically titled Kayak Tour edition that comes in a jewel case limited to 105. I recommend the box but it'd be pretty badass to have the "Kayak Tour" edition of anything.
Hit up the label if you are interested.
Posted by Auxiliary Out at 6:59 PM

release is also available free for download at enough records http://enoughrecords.scene.org/?cat=enrmp271
please get the tape if you like the release!