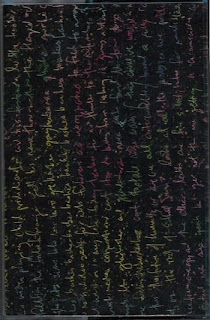 Now I've only heard a small chunk of Jeff Astin's considerable output as Xiphiidae but damn if I don't feel like Pisces Muse is the best thing he's ever done, as Xiphiidae or with any other project for that matter.
To try to communicate the sound of the tape to you the only "sounds-like" card I can really play is that it's somewhat similar to Spencer Clark's stuff as Monopoly Child or Black Joker. The tape however is so much more dense, dynamic and environmental. Clark has done some great work under those guises but you're also locked in a single frame of mind when you listen to those records. Astin's work here is exceedingly dimensional; it puts you in a trance, it puts you in a zone but it also puts you in a whole new mental locale. You get whisked around in an abstract, psycho-geographical travel tape. Leaves crunch, water drips, occasionally people murmur but simultaneously and continuously Astin is rocking your body with relentlessly catchy, organic micro-beats. I don't know for sure what Astin had at his disposal here, but it sounds like at least a hand drum, tapes, a thumb piano and keyboard too.
Coming to life in mucky tape warble, the jams rolls on a 1-2-3-4 drumbeat against a heavy forest of thunder and trail life. Changing up to a speedy jaunt of elliptical loops, it's a race between the trickling creek, jittery thumb piano and thump-thump-thumping hand drum. And the jam pumps along teeming with life. It's particularly interesting at the piece's end when Astin gradually peels back the layers revealing the pulsing tendons underneath.
The next one slows up the tempo a tad, giving the listener a deeper look into the sinewy tendrils of the beat. The editing and pacing here are both fantastic. There's a handful of pieces across the forty-ish minute runtime, but within a "piece" Astin will often change things up, for instance introducing outside recordings of garbled speech and whatnot then seamlessly re-mold the beat for the new environment. I actually really dig the last set of rhythms on Side A as they're much more direct, offsetting the effusive, abstract sound collage.
Most of the beats move at a swift clip, remaining chill but consciously very active. Though the tape seems to be about an effortless flow Astin, doesn't mind jarring you back into reality with a bit of tape abuse at the end of the first side.
The next side seems to raise the bar even more. A strange, repeated groan and burbling, hyperactive percussion lead off the piece making for what is possibly the most tangled area in the tape. From that extra-jittery, jangled piece, Astin moves into a beat constructed from tape mulch and bird calls, while a repeating keyboard swell lulls and locks you into a serious hypno-coma. A hand drum enters gradually at some point, but only to lend a helping hand not to take over. It drops out soon and the piece subsists on the single keyboard motif until a violent bit of tape warble puts it down. I'd say it's one of the finest compositions here, rather than just grooving on the beat (which I'm perfectly fine with) there's more of an ebb and flow here. Sounds show up and disappear and the piece evolves with each new change. Later, the drum nearly takes a backseat to the aquatic splashes and drops, as the keyboard hums a relentless two-note tune. Halfway through Astin flips the script, imploding the beat a little, leaving a frantic stammering drum and a mellow, strung-out keyboard mussed with static tape blurs. The final piece is way shorter than the others but still very good despite it's comparative brevity. Astin seems to have trouble getting his Walkman working as the piece begins with whirs attempting to get the piece rolling. After a few moments, it takes off on its own, constituting the most laidback piece of the tape culminating in keyboarded windchimes.
It seems like about every month or so Stunned has been dropping something essential this year. Here's your next installment. Grab this.
Posted by Auxiliary Out at 8:32 AM