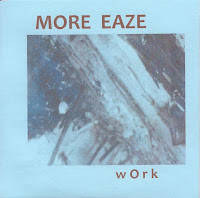 I've got a nice little stack of Kendra Steiner discs keeping me warm at night, and I'm gonna have to design a little round-up to get some words out on the bulk of them but I just couldn't wait any longer to inscribe some thoughts on one disc in particular. It's one I'm still processing and, let's be honest, I'm going to be processing it for a while. But if I waited until I "processed" something, I'd never write a goddamn thing.
After such a long hiatus and being out of the game, so to speak, I've been turning to trusted agents to guide me toward the truly essential stuff I've been missing out on. (Acquainting myself with the hulking morass of new labels and artists has proven just a tad overwhelming.) One morsel of advice I got was 'you gotta check out the More Eaze dude, he's the real deal.' Apparently, More Eaze--otherwise known as Marcus Rubio--is continually changing up his style, even from release to release. I can't vouch for that as wOrk is the only transmission I've been privy to, but that notion doesn't surprise me in the least. More Eaze seems like the type who is never content to occupy one zone for long.
In a woeful attempt to put too fine a point on it, wOrk encompasses synth bloopery, noise/jazz acoustic textures (via bow and reed) and a bit of ambient drone gussied up and spit out via an acute collage-y compositional aesthetic. And it fuckin' rules.
What befuddles me most is how More Eaze manages to go so totally out and yet capture a certain accessibility. I mean my mom's not gonna listen to this, but Rubio has a knack for finding little melodies and rhythms, sometimes forthright and sometimes subliminal, in whatever aural alchemy he's conjuring.
"GQ DQ for Clarinet and Tape" marries an early 20th century-era classical clarinet with vocal and cowbell samples you'd find in early boom bap, all stirred up into a mystery stew. And it doesn't sound hacky or attention-seeking in the least, the sounds marinate surprisingly well together. Yet before you know it, the track has morphed into a groovy jazz duet for clarinet and sampler. Additionally, the opening and closing tracks of wOrk highlight ongoing sonic contradictions: blank, deadpan drones bristle and quiver with life on "Trio for Bowed and Object and Sustaining Instruments" while the modular synth/feedback loop doohickey "N3v3r 4fit" transacts randomness into form.
Silence is also prized in wOrk. Don't misunderstand me, this is not a quiet album. Quite the opposite actually. But Rubio understands silence is an oft-overlooked tool at the musician/composer's disposal and exploits it to the hilt. Creating a milieu lit with the sonic approximation of chiaroscuro, Rubio delves deep into hi-contrast sounds (silences included). Sometimes those silences manifest in very long forms as on the aforementioned "Trio" but more often the silences are scaled way down intermingling with various flurries of sounds.
A quartet of brief pieces under the title "Bagatelle" is possibly the pinnacle of the disc. Each piece is roughly around a minute, containing a specific idea of its own which also resonates in context with the other three. The first brews air blown through a non-vibrating reed with synth tones which is opened up in the second of the pieces, where a jazz drummer discovers a drum machine for the first time and a cello groans incessantly. Throughout the disc, it's often hard to distinguish the origin of a given sound, whether synthetic or organic, and the third piece features twinkling chimes that reveal themselves to be sourced from electricity and not kinetic energy. The final of the four pieces, the most well-formed by traditional definition, splits its time between an uptempo jammer and glistening orchestral swell; of course, the time we are talking about here is maybe 75 seconds.
To me, one of the worthwhile tests of an artist's powers is whether he or she can fully express an idea in a minute, or other similar small scale. Expansive vision relayed in compact form demonstrates true mastery and the "Bagatelle" movements are all fine examples. Rubio does not panic in light of his constricted time frame and overplay his hand; this is not a situation of simply overloading/whelming the listener with sound. As frenetic as wOrk often is, there's an underlying patience and refinement in its construction.
All told, wOrk integrates elements that I love (rich textures--electric and acoustic, adventurous compositions), which is cause for excitement, but that those elements are integrated with such finesse and aplomb is cause for celebration. The sounds described here are just the tip of the iceberg.
I think this disc may be out-of-print but it's definitely worth checking with Kendra Steiner about it and scoping some of the other excellent wares.
Posted by Auxiliary Out at 11:00 AM