Kanukanakina - A - Arrival B - Departure [A Giant Fern] 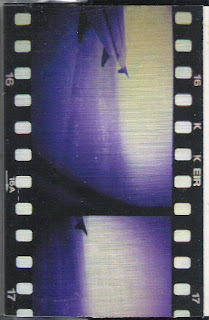 I don't know much about this Kanukanakina project other than Portuguese artist Miguel Pipa is the brains behind the operation. Well, that, and I know this tape rules.
There is a laundry list of materials in Portuguese that I plugged into the ol' internet for a translation and this is what it came up with: "born from crossing experiments, the logical connections and little probable, Funding outer races for bentados collection of pedals, a vast collection of hardware, box-bent, changed radios, tv, sampletrack-bent keyboards, video games, tapes, vinyl, glitch box." There are probably more than a few inaccuracies there but you get the idea.
All this is beside the point however, who needs words when you have sounds?
While Pipa sets a wide array of interesting sounds in motion, the key to the tape is the space he leaves. Pipa never overplays his hand, instead he takes his time traveling through the aural space, suitcase in hand, brimming with sounds. As the title A - Arrival B - Departure suggests, the tape does feel like a journey.
The sounds range from quiet crackle to strange, frantic circuit emanations to mechanical/percussive clanks to (I think) treated field recordings/samples. Pipa does a splendid job imbuing his palette with vibrant energy yet keeping so it so tightly coiled there is a heightened sense of anticipation throughout the tape. There is a tactile quality to the sounds which I love, you can feel Pipa's hands creating this. The tape continually develops organic little rhythms, often juxtaposing frequencies each with its own opposing rhythm.
One of the most fascinating aspects to the tape is the tension between chance and control. The type of sounds that Pipa works with suggest an element of randomness or unpredictability but the feel of the tape is so confident and focused, it's hard to believe that this was not composed down to each nanosecond. Truth be told, I have no idea where Arrival lies on the spectrum between complete composition and complete improvisation. Considering how meticulous the construction is, I would not at all be surprised if Pipa had somehow created sheet music for the entire album despite there being very few musical notes over the course of the tape (there is a very lovely lullaby that opens the second side however.)
The process of the tape is a single fluid motion through a series of vignettes, each created on its own terms yet a seamless extension of those that precede it. Pipa is precise in his layering of the audio: he uses the stereo spectrum to his advantage, creating the illusion of three-dimensional space between the two headphones and he only chooses a few sounds at a time, arranging them to all have impact without causing distraction.
I don't know how long this guy has been doing this, but he sounds like a master to me.
With the culmination of the tape Pipa breaks out of the intense subtlety. He lets circuits squeal and freakout leading to a brief clip of an author at a book reading then onto a heavily processed reconstruction of a female-fronted pop song. Then the curtain falls.
Comparisons that come to mind are Peter Taylor's excellent Mortuus Auris & the Black Hand project or the Foton tape on Field Hymns that I recently reviewed. Pipa is traveling in his own channel though and its a good idea to come along for the ride. Putting the headphones on and pressing play is simply a treat.
The cassette is still available from Portugal's A Giant Fern label and I definitely recommend you take a look.
Posted by Auxiliary Out at 11:58 AM