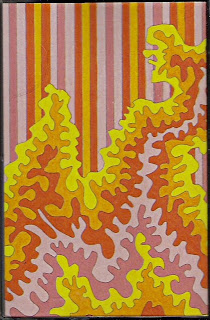 I picked up the oddly named Garrincha & the Stolen Elk's 905 tape a while back. It was a lo-fi trip into outer space guitar/sax/synth jams (which I'll get to in a bit.) I definitely wasn't prepped for what came on the new Stunned tape though. The duo of Davy Bui and Matt Kretzmann are joined by the stellar rhythm section of Karlos Ayala (bass) and Kevin Corcoran (drums.) Don't know if the expansion is gonna be permanent or not but I wouldn't mind it.
We Were Wyoming certainly starts on the right foot, "I Can Only Paint with One Emotional Tone/Acqueduct Flux." A solid, repetitive bass riff anchors the piece along with rumbling, almost funky, drums. Bui and Kretzmann deliver vocals back and forth over the stoic rhythm section before erupting into a mountainous spasm of sax, guitar and moog. The duo is really drawing on no wave and the entirety of Dischord's output (Fugazi through Black Eyes.) The "Aqueduct Flux" portion goes through an extended mellow bridge of guitar and drums before ramping up the energy with an angular riff. It's Bui's sax passage that really solidifies the piece though. "Tut" adds a little more Touch & Go to the mix, David Yow-meets-Guy Piccioto vocal delivery over an alternately loosey-goosey and heavy rhythm section. The moog and sax strategically push the track off the edge at key moments.
The instrumental "Crushed (Once)" delivers a great guitar riff from the get-go with a jumpy rhythm section pumping behind. That particular riff absolutely towers over everything that goes on in the rest of the track so it's return midway through is like a shot of adrenaline to the heart. "Staccato Lights" is structured around repeated jabs of sax, synth and guitar and raspy vocals but settles into a nice swing by the end. Ultimately though, the crew just jams it into submission. "II" is just an outro of sorts--a heavily effected, stream of generally unintelligible insults.
I totally lived on this kind of shit when I was in high school and it's great hear someone go at it with fresh energy. And it's nice to hear it on tape! Totally unexpected but entirely welcome. More please. 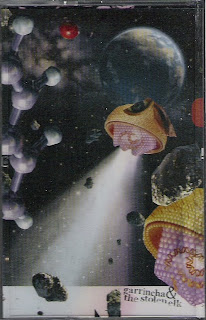 Black Sambo/White Mamba starts out with "Black Sambo" and an intergalactic lurchfest. Electronic crunch, ray gun-style synth manipulation, cosmic sax bleats. Not too shabby. The noise just seems to hurtle through space on its own patient engine. This sounds way grimier than the Stunned tape. Even the "quieter" passages have plenty of grit in the atmosphere. "Octopussy" is a straight ahead guitar/sax duet. Kretzmann on the palm mutes and Bui on the sax runs. Oddly enough, it turns out to be a tender little piece.
The duo heads off side b with "Deserted" and I think they may both be on guitar. Heavily delayed strings move from loner blues into squalling shimmers. It's nice enough but I am feeling the other title track "White Mamba" much more. Someone's got their keyboard set to the "bossanova" setting and the whole thing swings with a killer tropical melody from the sax. The guitar is onto some radar jamming shit though, trying to cover up the whole affair in feedback. The jam devolves into a street brawl between Kretzmann's sledgehammer and Bui's blowtorch. A real cool killer.
Nice pair of tapes. I'm feeling the Stunned one more but that's no slag on the 905. The duo have a lot going for them so I'm looking to see where they'll take us next. These are probably gone from the labels (never hurts to ask though) so it's probably time to hit the distros if you're interested.
Posted by Auxiliary Out at 8:06 AM