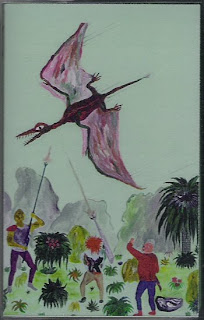 Got a pair of recent cassingles here, each with their own specific genre influences.
Tad (not the local grunge mofos) is the musical moniker of Tynan Krakoff, perhaps better known as the CEO of DNT Records. His debut Path to the Dutchie is dub through and through. And I don't been "dubby," lots of bands are that but this tape is creatively and faithfully dub.
The first side is the title track which blinks to a start with synth blips and some groovy-ass organ. Krakoff unleashes one of the most monster motherfucking grooves I've heard in a while. The melody is straight-up infectious and Krakoff couches it in an ever-shifting sound world of heavily effected keyboards, guitar and drum programming and also plenty of oddities (I swear there is a sample from NFL Blitz in here.) It's flat out amazing and gets out of yr hair quickly. This would be sad except the flip side "Version" is probably an even better rendition. Making good use of a reverb-laden melodica, this side takes the previous side's infectious melody and turns it inside out. While the melody holds down the jam, Krakoff sets about, in true dub fashion, to live delay pedal knob twiddling of percussion samples, trumpeting elephants, cackling dolphins and, I don't know, some insane monkeys or something. Totally out of left field and yet totally loveable.
This thing is about the perfect cassingle. Not just because the music is great but because the two tracks sound so great looped back to back over and over. Vinyl ain't gonna do that for you. Having to flip the record over constantly would make it a chore, and I'm pretty sure Tad would come out fiercely against chores. This tape has been out for two months and I ain't sick of this bad boy yet; I am starting to doubt I ever will be. Absolutely recommended. 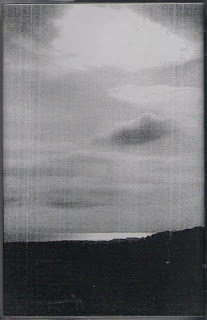 Switching gears drastically, Al Qaeda and Demonologists are reportedly finding their black metal roots with this cassingle. I figure Bad Brains put reggae and hardcore hand and hand so why can't I do that with black metal and dub for this review? I haven't heard either of these crews so this makes for a quick get-to-know-ya.
Al Qaeda makes the jumpoff with the trio delivering 5 tracks in like 4 minutes. I was probably expecting 45 second raging metal tunes but AQ got something more abstract brewing. Starting out with "Battle Fuck" (a name so ridiculous it just might work) percussive bass throbs and wind blows before some obliterated vocal cord shredding bares its teeth against a weird looped keyboard. End track 1. "Bottom Feeder" actually features a rock band set-up pounding away on a rhythmic riff and the track plays out like an intro to an unmade album. "Shitting Gold" features warbly keyboard against distorted backwards tape loops or something of the like. "Lepper Cuss" opens with a scream and shuffles along heavy on the groove and light on the fidelity. Possibly the tape's standout. It shifts abruptly into "Veritable" which sounds a little too clean to be "black." Nearly glistening tones are sustained all the way through along with some bizarre brushing-your-teeth noises.
Passing to the other side, Demonologists deliver a single sidelong track, "The Bastard Curse." The jam is immediately heavy on the crunch. This is some Oops, All Berries crunch. I can't tell what the fuck is going on underneath all the distortion on this thing. Vocals? Guitar? Keyboard? Drums? There are a few sustained tones near the end but that might just be feedback. I figure if this was made with a combustion engine that runs on goat's blood, I'd get a press release letting me know, right? Then again maybe not...
Both tapes are available from the labels. The Tad tape comes shrinkwrapped with sweet prehistoric artwork. The AQ/Demonologists cassette features awesomely bleak xeroxography. A pair of handsome fellers don't ya think?
Posted by Auxiliary Out at 8:16 PM