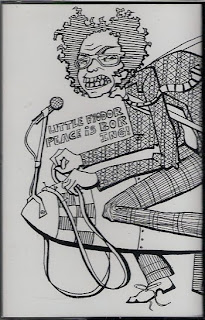 Little Fyodor is a strange dude, the cover illustration is barely an exaggeration. He's also got cred rarely seen in the world of limited edition tapes: nearly three decades worth of work and even a record on Elephant 6!
Fyodor crams ten tracks into the first side ("Side Atom,") starting things off with "Death Sides Now." It's a slow, percussion and voice ditty about ghosts and ghouls that makes for a good lead into the frighteningly spastic "That was a Mistake." Fyodor makes like Devo's crazier cousin with frenetic guitar shards, hyper-kinetic synths and "flustered nerd" vocals. I particularly love when Fyodor changes the chorus from "That was a mistake!/That was a mistake!" to "Condoleeza Rice!/Condoleeza Rice!" at the end of the song. Maybe my favorite track from the tape. I should probably address the most in-your-face element of the album: Fyodor's voice. His high-pitched, cartoonish drawl will definitely grate on the less easygoing nerves out there, although I must say, it's hard to imagine the songs without it. The vocals are bold and definitely throw caution to the wind making for a real love-it-or-hate-it situation. For those who can take the vocals though, there's a lot to like about the record.
"All My Clothes are Uncomfortable" isn't much more than a sketch but that doesn't make it any less fun. Fyodor and his gang manage to pack much more than a minute's worth of jittery energy and jangly melodies into the 62 seconds of "Spider Dream." "Open Up Your Heart (and Let the Sunshine In" sounds like the creepiest nursery song in history ("Let the sunshine in/Face it with a grin/Smilers never lose/Frowners never win") though that's due in part to numerous mentions of combating the Devil. There's a great music box-style melody to it. "You Don't Know" is another solid song with anti-authoritarian and/or just silly lyrics ("Rules and regulations are your latest fad" and "You only care about the hairspray in your hair"). Another favorite is "Cruising (Bummer Scene)" which reminds me of a number of artists, one of the most surprising being Girls Against Boys. It slows the tempo down a bit and it really pays off. There's some great toy piano melodies and lead guitar work all anchored by funky rhythm guitar and Fyodor's suitably hushed vocals. "Everybody's Sick" is literally a scat song, more of an oddity that anything else yet it's one of the five longest songs on the album (though that still isn't very long.)
Another highlight is the giddy, anti-war (and anti-mosquito) sing-along "The God Gripe Song" whose chorus leads off with the line "Why are people so fucked up?" After a brief, warbling rendition of "What a Wonderful World" the band launches into the track which is probably the catchiest two minutes of the tape. Following that up is "Silly Noise" which is basically just that, slide whistle, oscillator etc.
The title track opens up the second side ("Side Bomb") with dissonant synthesizers and ironically callous lyrics "Peace is boring/I want murder/Peace is boring/I crave drama". At 4 minutes though, it's way too much of the same repeated melodic progression. "The Natural Progression of Life" has a heavy, frantic bass throb that dominates the track before changing into a reggae-ish song. It's another slower jam that, once again, really works. Fyodor explores one of the scariest things about dying--no longer having worldly knowledge or sensations--and that "nothing will never matter to you again." Definitely a standout. From there, there is a banjo-laden Nancy Sinatra cover, "Boots," before "Death Wish," another upbeat anti-war number that goes half-time halfway through for some deep jamming until it wraps. The finale, "Fuck-a-duck-a-luck-a-luck-a-ding-dong" finds Fyodor finally going off the deep end into complete nonsense including weird reverbed chipmunk voices repeating the title. There's a nice theremin-style freakout though.
This is a well-made record for those into its spazzy, hyperbolic aesthetic. The tape sounds warm, loud and clear and looks professional with cool artwork by Hannah Batsel and lime green cassettes with WW2 images on the labels. Still available from the Fox Pop Recording Co.
Posted by Auxiliary Out at 10:23 AM